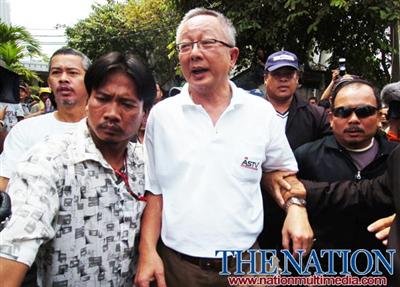 PHUKET / BANGKOK: Sondhi Limthongkul, media mogul and one of the five core leaders of the yellow-shirted People’s Alliance for Democracy (PAD), is in serious condition after being shot in the head early this morning.

Doctors are conducting an urgent operation on Mr Sondhi that is expected to finish around noon.

Mr Sondhi has no wounds on his body.

His driver, Vayupak Mussi, was also seriously wounded in the attack but is now in stable condition, doctors said.

PAD spokesman Parnthep Pualpongpan said at least two attackers riding in a pick-up truck blocked Sondhi’s vehicle on Samsen Road in Bangkok as he was heading to the office of his Manager newspaper at about 5am.

The attackers shot out the tires of Sondhi’s vehicle before stepping out of their car and spraying the car with bullets. The attack lasted about five minutes before the attackers sped away.

Police who rushed to the scene found Sondhi’s car riddled with bullets. They collected more than 100 AK-16 bullet casings from the scene as evidence.

Mr Parnthep said Mr Sondhi had earlier been informed he could possibly be the target of an attack, but ignored the warnings.

Chamnong Paokorn, a 53-year-old bus driver who witnessed the attack, said that he was driving his bus past Lamworanut Temple when he saw a blue pick-up truck with no license plate block Sondhi’s vehicle.

Then two men in the back of the pick-up then opened fire on the vehicle. Another vehicle sped to the scene and exchanged fire with the attackers, who then fled the scene.

Mr Sondhi had been scheduled to be a keynote speaker at the PAD rally to take place in Phuket on Saturday.