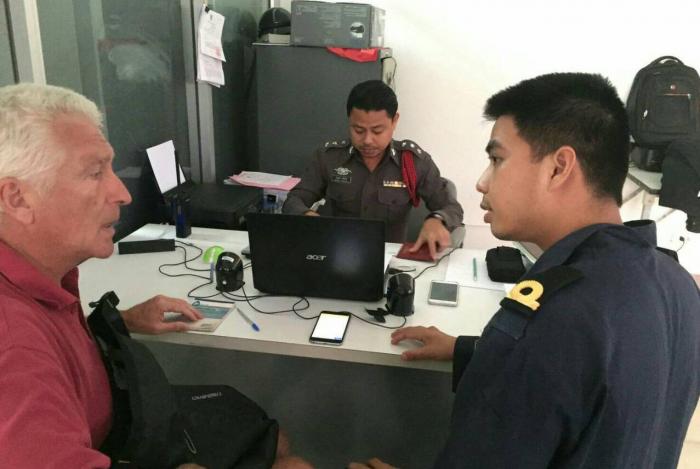 PHUKET: Officials are searching for a Russian man who went missing on Sunday while swimming at Koh Payan, Similan Islands.

Aleksei Stashkov reportedly disappeared while swimming on a trip with his cousin, Mikhail Kolmogorov, 60.

Mr Kolmogorov filed a missing persons report on Tuesday after he came across navy personnel from the Royal Thai Navy Third Area Command, while searching for his cousin at Koh Miang.

He was taken to Kuraburi Police Station to lodge an official report, which had to be translated via phone as Mr Kolmogorov couldn’t speak any english.

“Mr Stashkov and I are cousins. We left Chalong Pier on a yacht on Saturday at 9pm, to head to the Similan Islands,” read Mr Kolmogorov’s translated statement to the police.

“We arrived at Koh Payan early Sunday morning, where Mr Stashkov went to swim about 9am. Some time later, I heard him shouting for help, so I threw him a roped-dinghy.

“However, the waves were very rough and he could not reach it. So I started cutting the rope tying the boat to the buoy. This took about 10 minutes, and when I finally managed to free the boat, he had disappeared. I then called my friends and brother in Phuket to inform them of the incident.

“The next day, I sailed the yacht around Koh Payan and Koh Hu Yong to search for him, but to no avail. The day after that, I was searching for him in Koh Miang when I came across Navy officials and informed them of the incident.”

Navy personnel have launched a search operation by both air and sea. They are also coordinating with fishing and tour boats to help look for Mr Stashkov, who has still not been found.

Mr Mikhail Kolmogorov had arrived in Thailand on October 11.