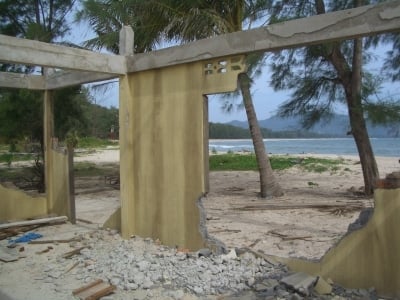 LAYAN: A “destroyed” building specially constructed at Layan Beach by the team shooting the TV tsunami mini-series Aftermath, will not be knocked down.

Instead, it is to be taken over by the Sirinath National Park authorities and converted into a rest area for tourists and park officials.

The crew shooting the mini-series, which will be shown on the BBC and HBO networks, was filming at the beach for around a week and attempted to recreate the chaos of the days after the tsunami hit.

Once filming was completed, tourists and residents were initially left perplexed as to why there was a new “smashed” building in the national park, strewn with Christmas decorations and other garbage.

One walker on the beach even reported coming across a fake arm and a fake leg, made of silicon, apparently left behind on the beach by the film crew.

This morning, Veeraphol Ratana, Chief Protection Officer of Layan Beach, which is within Sirinath National Park, cleared up the mystery.

“The house was part of the set for the mini-series. We asked the film-makers to leave it because we plan to fix it up so tourists and park officials can use it for relaxing.

“It would have been easy for the film crew to destroy the building and clear the site but I feel that the foundations will be useful for us. We plan to have it ready for next high season.”

As for the debris lying around, he said, “Much of the rubbish still on the beach consists of trees that were knocked down by the tsunami and debris brought in by the monsoon.

“Unfortunately, at the moment we do not have the budget or the personnel to clear it all up,” he added, “but we hope to have the beach completely cleaned by the start of high season.”

Gazette reporters were not able to to find the arm and leg, so it appears that they have been picked up, possibly by local children.

K. Veeraphol noted that park officials may legally erect “temporary” structures such as salas in a national park area without prior permission. This is what is planned for the Aftermath structure.

About 100 local people joined in the filming and were paid 500 baht a day. Local resident Nares Promdan, 52, said that the production team brought in around 300 dummy corpses for the shooting.

“They brought in wood and dummies from Khao Lak to make the area look like it did in the days following the tsunami. It didn’t cause any major problems here, though at one point almost 100 ten-wheel trucks were parking along the beach area. The last temporary toilet was removed only this morning,” he added.

Worapong Mooktang, 12, who spent three days working as an extra on the production, said, “I played a boy who helped the main character after the tsunami by giving him supplies. It was very hot and we had to work all day, but that was fine – I had a lot of fun.”