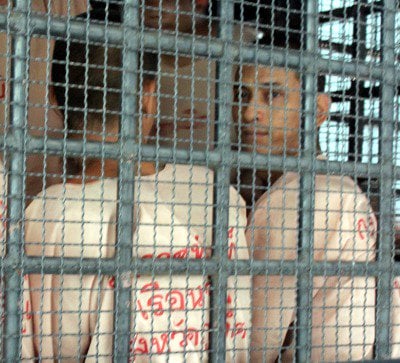 PHUKET: The man who drove the motorbike, used in the attack that led to the death Australian tourist Michelle Smith on June 20, changed his plea today after initially denying all charges against him.

At the beginning of today’s court proceedings, Surasak Suwannachote admitted to his part in the crime and pleaded guilty to the charge of “gang robbery causing death”.

His accomplice, Surin Tadthong, initially denied that he was involved with the killing of Ms Smith.

One of two judges asked Surin that if he were innocent, why did he confess to the police when arrested, to which Surin replied that he was afraid of the police.

The judge told Surin that it was his right to deny the charges, but if he were found guilty, his punishment might be harsher than that handed down to Surasak.

There followed a brief pause, after which an emotional Surin changed his plea back to guilty.

Visibly shaken, Surin repeated his plea of guilt when confronted with CCTV footage of the incident (see above), that showed him driving the motorbike from which Mr Surasak dismounted to attempt the robbery that resulted in the death of Mrs Smith.

NOTE: Some people may find the video footage above, which is still available on YouTube, disturbing.

Ailing dolphin under treatment in Phuket