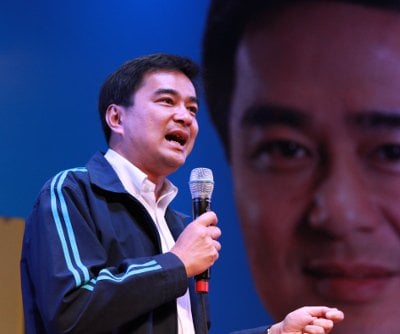 PHUKET: Democrat Party leader Abhisit Vejjajiva called on the people of Phuket recently to help develop a “blueprint” to solve the problems facing the tourism industry on the island.

About a thousand local people who joined the seminar at the Simon Star Theater in Rassada were asked to help construct a clear picture of the issues to be faced.

“Phuket has many problems including public transport, illegal taxis and the mafia,” Deputy Rassada Mayor Pawat Supphasuwan told the gathering.

“If these problems aren’t solved, it will be the ruin of Phuket tourism,” he warned.

Tanan Tanpaiboon, adviser and past president of the Property Association, explained that the province was becoming over developed.

Although tourist arrival figures continue to increase at a rate of more than 10%, this was not enough to justify the huge expansion in the number of new real estate projects on the island.

“I worry that if housing construction is not controlled, Phuket will face an economic bubble in the future,” he said.

“The Thai people want to see the development of their provinces take a new direction,” MP Abhisit told the media after the seminar.

“We talked about the challenges of improving the economy in Phuket, which is based on tourism. We looked at ways to make the economy sustainable – it should benefit the local people,” he said.

MP Abisit explained that similar seminars would be held all over Thailand, with a composite national blueprint presented to the government in August.