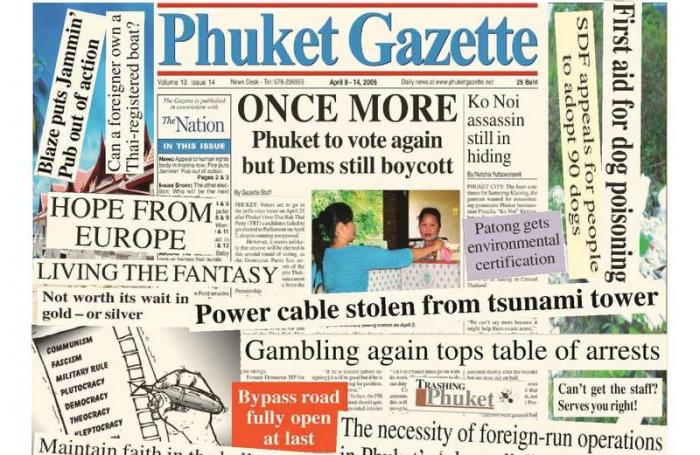 PHUKET: In A rare move, the Phuket Gazette dove into politics in the April 8-14, 2006 edition as the Democrat Party announced a boycott of the parliamentary election polls, despite Thaksin Shinawatra announcing that he would step down from the Premiership.

“What the PM did last night was for his own benefit; ordinary people who do not understand politics in depth will have seen his announcement and will admire him. But last night, as I was listening to him, many people called me to ask, ‘What does it mean?'” said former Democrat MP and current mayor of Patong Chalermlak Kebsap. “He said he would continue to push Thai Rak Thai policies [after stepping down], so that means nothing has changed.”

Mr Thaksin was eventually slapped with a number of charges including abuse of power and tax evasion – I wonder if his name is buried somewhere in the Panama Papers, which are the recent unprecedented leak of 11.5m files from the database of the world’s fourth biggest offshore law firm. These documents show the multitude of ways in which the rich can exploit offshore tax regimes, though do not directly connect them to criminal activity. Already, 12 national leaders are among 143 politicians, their families and close associates implicated in the documents.

Despite vowing to step down, it wasn’t until later that year that Mr Thaksin and his party were removed from power via a military coup. His younger sister, Yingluck, was elected Prime Minister in 2011, but also removed from power by the military after a political deadlock – see National Council for Peace and Order. But we are getting ahead of ourselves.

As this issue of the Gazette goes to press, Thailand’s democratic process continues to flounder. Eclipsed by the political drama playing out in recent months, however, has been the upcoming Senate election, reported Janyaporn Morel ten years ago. Little did the Gazette editors and reporters know at the time that not one, but three coups would be in store for the Kingdom over the next 10 years.

The phrase ‘uncharted waters’ is being used a great deal by the press worldwide in reporting the April 2 general elections in Thailand, the Gazette warned in its editorial.

At the time of going to press, not all the votes had been counted, but most pundits were predicting that the election could result in a parliament that would not meet constitutional requirements, leading to a second election, possibly a third, until something radical happened to break the deadlock.

This is all very worrying. Indeed, in Bangkok, a recent opinion survey found that many people were worried that the country would descend into chaos and violence.

However, the April 8 issue wasn’t all politics. The silence of the tsunami warning towers along Phuket’s west coast last week eerily echoed a similar silence that fell over the island in April 2006. As this week’s Gazette goes to print, the reason behind the malfunctioning of five warning towers last week remains unknown. However, ten years ago the silence of the Ao Yon tower was very clear, with the headline reading: ‘Power cable stolen from tsunami tower’.

Government officials rightfully railed against the unknown thieves who had stolen the cable, rending the tower inoperative.

“The thieves may make just 500 baht [from selling the copper cable as scrap metal], but they didn’t think that it might save more than 100 lives if a tsunami happened,” said an officer at the Department of Disaster Prevention and Mitigation Phuket Office. “If the power is cut from one tower, then all the other towers further down that line will be put out of action as well.

Though only follow-up stories will reveal the truth behind the towers’ failure to sound last week, we can only hope it wasn’t a repeat of such a senseless petty crime.