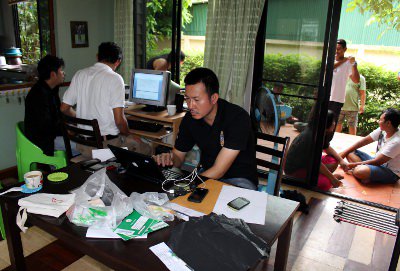 “CSD police searched the two houses today because we received reports from locals of loan shark operations running rampant. We also recently heard that a man who vouched for a loan was attacked by a group of loan sharks,” explained Col Watcharapol Thongluan.

Last week, a Rassada council member made a public plea to the police to crack down on loan sharking on the island in the wake of his younger brother’s claim of being beaten by a large group of loan sharks after vouching for an ex-employee.

At 8:30am, Col Watcharapol Thongluan led CSD police, Chalong Police and police volunteers in a search of rental house 12/9 on Chao Fa East Road, then moved on to house 11/57 in Moo 8 Pa Khlock, Thalang.

“We could only search two houses because there was nobody in the third house,” explained Col Watcharapol.

“The house in Chalong was operating as a loan sharking office, with guards securing the area,” the Col said.

All eight suspects arrested in the Chalong operation, including one woman, were sent to Chalong Police Station for processing.

Also seized were nine bladed weapons and one bag of dried kratom leaves.

The suspects were sent to Thalang Police Station for processing.

“The groups we arrested today were major loan sharks in Phuket,” he added.

Col Watcharapol explained that the issue of loan sharks in Phuket was more serious than other provinces in Region 8. He blamed this on the nature of the tourism industry.

“So many operators in Phuket need quick, easy loans,” he said.

“Many debtors are threatened, attacked and have their property seized. It is completely unacceptable for debtors to be physically attacked. Police have been working on ridding the island of this issue, but it’s difficult,” he added.

Phuket Raceweek gets off to a lively start