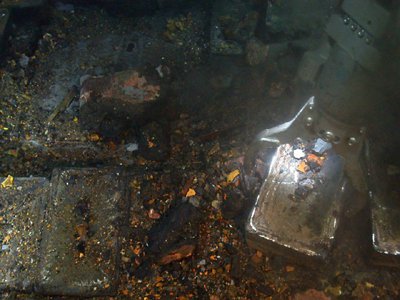 PHUKET: Odyssey Marine Exploration on Wednesday announced it has recovered approximately 48 tons of silver bullion from a British cargo ship that sank off the Irish coast during World War II.

The bullion was recovered from the SS Gairsoppa, a 412-foot steel-hulled British cargo ship that sank in February 1941, at a depth of approximately three miles, some 300 miles off the Irish coast in the Atlantic Ocean.

In total, the deep-ocean exploration company said it has recovered 1,203 silver bars or approximately 1.4 million troy ounces of silver so far, which has been transported to a secure facility in the United Kingdom (UK), as the project is under contract with the UK Department for Transport. The current approximate value of the find is US$38 million.

According to Odyssey, the recovery marks a record-breaking operation that has so far produced the heaviest and deepest recovery of precious metals from a shipwreck.

However, research indicates that more silver is expected to be found since the number of silver bars recovered so far only represents approximately 43 per cent of the insured silver bars, or approximately 20 per cent of the total silver cargo. In addition, an estimated 600,000 ounces of insured silver is also expected to be found on the SS Mantola, a second modern shipwreck recovery project being conducted in conjunction with the Gairsoppa project.

Serial numbers and other markings on the silver bars recovered to date all match the contemporary insured silver cargo documentation, therefore, it is anticipated that the entire insured amount is aboard. However, it is unknown at this point whether there is additional uninsured silver on the site.

During the War, the UK Government insured privately owned cargo under their War Risk Insurance program.

The SS Gairsoppa sailed with several convoys, before joining Convoy SL 64. Running low on fuel, she left the convoy and headed for Galway, Ireland, but was torpedoed and sunk by a German U-boat. The wreck of the ship was located in 2011, and it is estimated that the total value of recovery could exceed US$200 million (source: Wikimedia).

After making an insurance payment of approximately 325,000 pounds sterling (1941 value) to the owners of the silver cargo lost aboard the Gairsoppa, the UK Government became the owners of the insured cargo. As some sources, including ‘Lloyd’s War Losses’, indicate a total silver cargo worth 600,000 pounds sterling (1941 value) lost aboard the Gairsoppa, there may have been additional government-owned silver cargo aboard that would have been self-insured.

Under the terms of the agreement, which follows standard commercial practices, Odyssey bears the risk of search and recovery and retains 80% of the net salved value of the Gairsoppa silver cargo after recovering its expenses.

Phuket Gazette: US fighting the flab