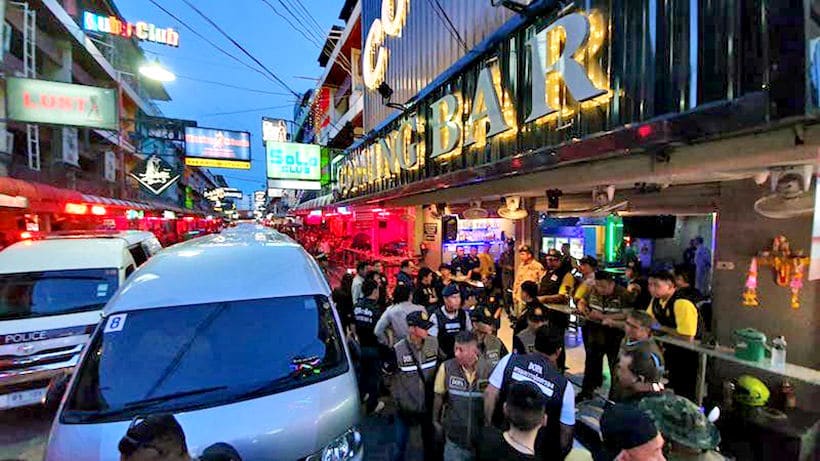 Pattaya’s police chief has been transferred, the foreign bar owners are being deported and will be blacklisted. This has been the swift retribution for local senior police and the owners of ‘Coming Bar’ for allowing prostitution and under-age sex on their premises.

In addition, the Bang Lamung district police chief says the offending bar will be shut for five years for “damaging the image of tourism in Pattaya and Thailand”. Yesterday reports emerged of a raid of the Coming Bar in Soi 6 where evidence of sex-for-sale and a 17 year old sex worker was found. The owners of Coming Bar are a consortium of Taiwanese, Chinese and Thai nationals.

The Thaiger reported on the raid HERE.

Chonburi’s police chief has removed the acting head of the Pattaya police Pol Col Pongphan Wongmaneethet and four of his deputies from active duty pending an investigation. They have been accused of allowing the prostitution to continue under their watch. Amnat Charoensri, the Bang Lamung district chief, says that he’s ordered the bar shut for five years.

Channel 7 reports that the foreign owners of Coming Bar in Soi 6 would all be deported and blacklisted from re-entering Thailand in the future.

Just two weeks ago Pol Col Pongphan Wongmaneethet was part of a contingent of police and officials making a ‘spot raid’ on Pattaya’s Walking Street and proudly announcing that their visit had shown no signs of prostitution or illegal activities in the city’s infamous red light district. Read that story HERE.

Pol Col Pongphan Wongmaneethet, the deputy Chonburi police chief told media that if tourists or the public see any evidence of prostitution they can call 191. He also advised tourists that there was a Tourist Police office at the end of the street where officers can be informed directly.

Posted by PattayaupdateNews on Thursday, 6 June 2019