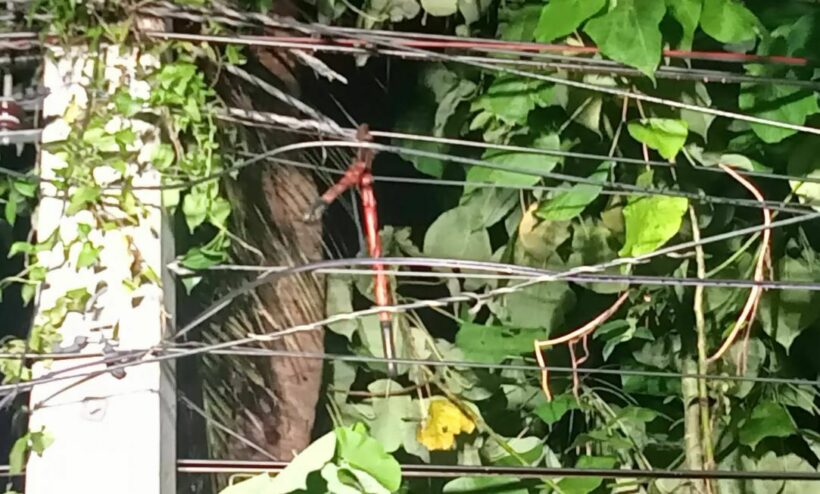 PHOTO: A dead man was found tangled in cables. (via Pattaya News)

An internet repairman in Bang Lamung had a morbid surprise when he was repairing internet cables in the evening and spotted a man standing by a tree. He called out to him in the dark, but the man did not reply. When he approached the still man, he discovered to his horror that the figure he saw was that of a dead man slumped against the tree, tangled in cables.

The incident took place on Friday near Number 36 Road in Bang Lamung in a tree-filled area the man was tasked with visiting to fix the internet wires. He discovered the body and was shocked but called the Nonprue Police around 7 pm Friday evening.

The police arrived on the scene and found the man hanging upright between two trees, wrapped in cables. They said there was no sign of any sort of confrontation or struggle implying a second person was involved in the death.

The man was identified as a 53 year old man and a motorbike that is believed to belong to the deceased man was found nearby. One clue police uncovered to what may have happened was a pair of wire cutters found still hanging from some high-voltage power cables near the man’s body.

The cause of death has not been fully determined but police say that the most likely cause of death was either suicide or an accidental death when he attempted to cut the power cables, perhaps to steal them and perhaps thinking it was the internet lines, not high-voltage dangerous wires.

gummy
3 minutes ago, palooka said: Still very viable if aluminium, just over 100,000 baht per tonne and price going one way- up- due to shortages in the market. Well that's tomorrows project sorted then 😄
Malc-Thai
1 hour ago, gummy said: Plus the unnecessary loading on the posts would just maybe allow them to replace at longer intervals if the redundant cable were to be removed. Well that is assuming they had proper foundations in the…