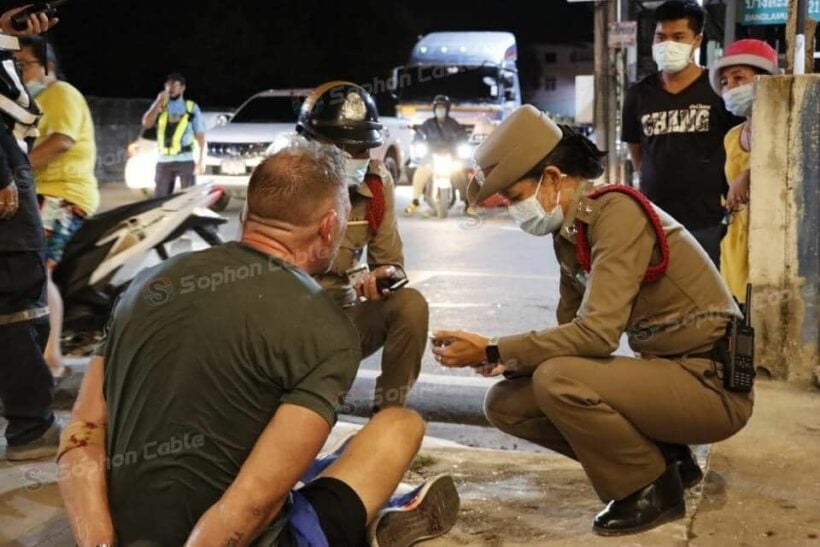 A foreign national has been detained in Pattaya, accused of reckless driving and road rage that caused significant damage to other vehicles. According to the Pattaya News, the incident occurred on Saturday night, when a black vehicle was seen bumping into and dragging 2 other vehicles along a road in the Banglamung district.

Witnesses alerted the police, who arrived on the scene and found a black car in the middle of the road, with a motorbike nearby. Both vehicles had sustained severe damage. A 50 year old unnamed man was lying injured on the footpath, having been detained by residents. It’s understood he was the driver of the black car.

The Pattaya News reports a witness as saying he heard a loud cracking noise and the sound of something being dragged along the road and ran into the street to see what was causing it. The witness reports seeing a black car dragging a damaged motorbike for a distance of around 800 metres, while other drivers gave chase. A number of local residents managed to block the black car’s path and forced the driver to stop.

The driver then attempted to flee on foot but was caught by residents and physically restrained until the police arrived on the scene. The foreigner sustained a number of facial injuries in a subsequent altercation. Police also discovered a black pick-up truck that had been damaged after being hit by the black car driven by the foreign man, whose nationality has not been disclosed.

Meanwhile, the owner of the damaged motorbike says she had just parked her bike to go shopping with her daughter when the black vehicle drove into it and dragged it along the street.

The foreign driver was taken to hospital for medical treatment under police escort. Officers say they will be examining CCTV footage of the area as part of their investigation. Police say the driver will be charged with reckless driving and multiple other charges.