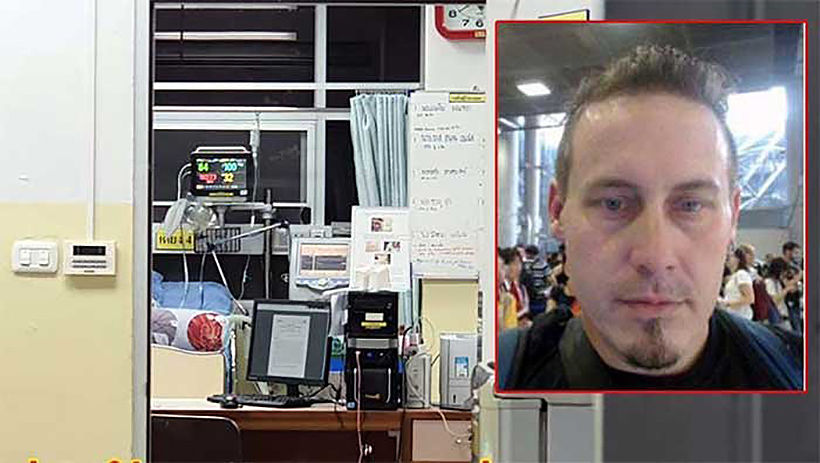 The American man who escaped from a Pattaya court has not died, according to the director of a hospital in southeastern Sa Kaeo province.

Now Thai media are using the word “Coma!!” in their latest headlines. A doctor says 39 year old Bart Allen Helmus is in critical condition and remains on a respirator.

ER staff confirmed to the media Helmus is still alive, but simply noted… “His heart is still pumping.”

His 30 year old wife is also in serious condition after he apparently shot her in the forehead. Earlier reports said she was only slightly wounded, but she’s actually in a “grievous state”, according the hospital spokesperson.

Thai outlet 77kaoded contradicted and added to earlier reports, saying Helmus fired twice at police with a BB gun modified into a 9mm pistol. He then reportedly shot his wife in the forehead before shooting himself in the head, according to the Thai news outlet.

This was the latest confirmed details about the situation yesterday HERE.

The American, his Thai wife and a Thai accomplice escaped from the holding cells at the Pattaya Courthouse on Monday in a brazen escape. Since the incident police have issued 11 arrest warrants for accomplices they believe aided and abetted the three.

The other Thai accomplice is now in detention.

UPDATE: The latest FACTS we have about American and Thai wife in Sa Kaew