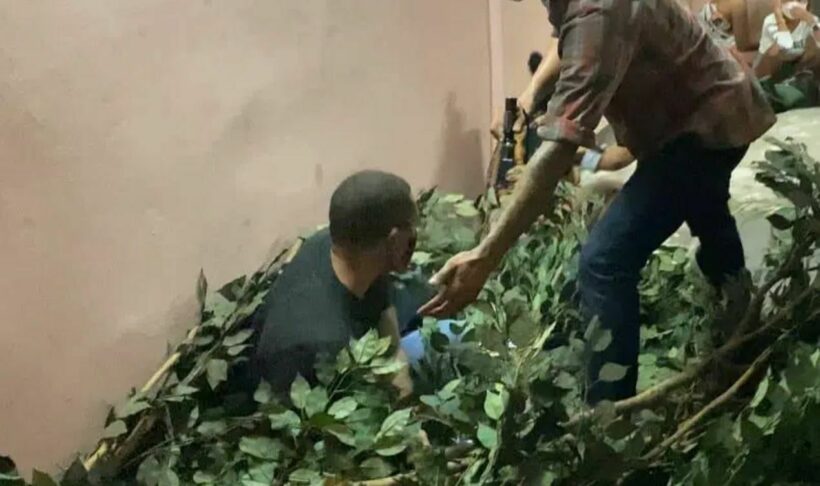 PHOTO: Some eagle-eyed readers might be able to spot the party-goer hiding in these branches.

A raid around Pattaya at the earliest hours of this morning brought over a hundred arrests for violating Covid-19 measures, drinking, gathering, and smoking shisha. The raid of 2 venues that attempted to skirt the national bar and club closure laws by operating as an alleged restaurant took place between midnight and 2 am.

The so-called restaurants had been operating undercover as bars and shisha lounges while the Covid-19 emergency decree closed all evening entertainment venues, banned alcohol, and restricted gatherings. Additionally, shisha has been illegal in Thailand for years. Despite attempting to disguise their activities as a restaurant, alcohol sales in restaurants are also prohibited in Chon Buri currently.

Inside the two venues, The Garden 168 and Mo Salah Bar and Restaurant, police found over 100 Thai people and foreigners partying, accused of drinking alcohol and smoking shisha in an atmosphere that was clearly not a restaurant. Chon Buri Provincial Police and Pattaya City Police first converged on the two Covid-19 rulebreaking venues around 11:30 pm and the raid covered both venues by 1 am.

The 2 police departments worked together after receiving tip-offs from anonymous local residents aware of the partying and worried about the probability of a Covid-19 cluster and increased infections spreading in the province. The Covid-19 restriction raid began at The Garden 168 when police arrested 29 people before making their way to Mo Salah next.

Police were met with resistance while people hoarded in the VIP area on an upper floor and police fought for 20 minutes to gain entry to the club. Inside, 72 people were arrested and the illegal use of shisha was discovered. In the pandemonium of the raid, people attempted to escape by jumping onto nearby rooftops or hiding in bathrooms and under piles of tree trimmings in the area around the club but police believe they turned up everyone attempting to escape their flouting of Covid-19 law.

In addition to raiding the 2 restaurant-turned-nightclubs, police continued to Pattaya Beach and arrested 20 more people that were drinking and gathering in groups against Chon Buri’s strict Covid-19 regulations. In both venues and on the beach, the open consumption of alcohol was found as well as socializing and mingling violating all safety precautions, without any social distancing and minimal use of masks.

In total, 121 people including local Thais and foreigners were taken into custody and brought to Pattaya City Police Station where they face additional prosecution and legal action. Penalties have been heightened under the emergency decree measures in Thailand in order to try to minimalize the spread and damage of Covid-19.

King Cotton
32 minutes ago, Kevod said: Just go full lockdown with stiffer penalties and shut violating premises down. Need to be taught a lesson, covid is here to stay so lockdown or open up and roll out vaccine.  Fair comment, for…