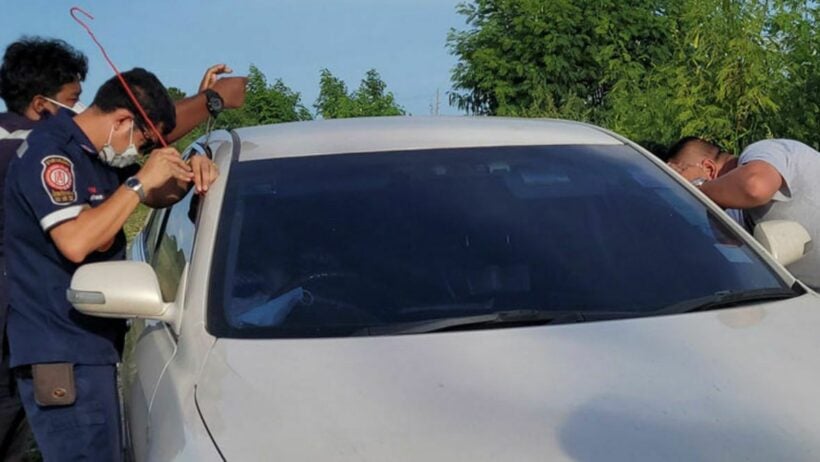 PHOTO: A Malaysian man was found dead in his car in Samut Prakan. (via Sutthiwit Chayutworakan)

The body of a missing Malaysian businessman was found dead in his car parked near a fish pond in Samut Prakan an apparent suicide. The 43 year old man was found dead in the car with the engine still running, and with a still-warm charcoal stove in the passenger seat beside him.

Wong Chen Hoe, a Malaysian national, was discovered dead in his white Toyota Camry yesterday evening after the owner of the fish pond he was parked beside discovered the car and the man inside. He had actually first seen the body on Thursday afternoon and saw the engine running, but had assumed that the driver had pulled over to take a rest. His fish pond is in an alleyway behind Wat Pha Pichai Temple so it could reasonably be a place to hide for a nap.

He let the car be but was surprised when area residents told him that the same car was still there and the engine was still running the next day. He went to investigate and knocked on the door several times in an attempt to wake the unconscious driver. When the man failed to respond at all, he called the police around 5 pm yesterday.

Meanwhile, relatives of the Malaysian businessman filed a missing person report with the local police yesterday morning. His wife said that he took the company sedan Thursday in the late morning and she hadn’t been able to reach him since. After he didn’t come home or call or message, she sent him a message on the Line app. The app show that the message was read but it was never replied to and he did not answer any of her attempts to call him.

She said that he’d been very stressed lately, facing a lot of pressure for financial losses as his business, like so many others, suffered during the Covid-19 pandemic. She contacted the police after she didn’t hear from him for a whole day and worried that he could potentially be in danger or suicidal due to the stress.

When rescue workers arrive at the car it was locked and they had to force their way in. Inside they found the Malaysian man dead in the driver seat, along with the charcoal stove in the passenger seat and half a bag of charcoal in the backseat. The hospital doctor called to the scene confirmed that there were no obvious signs of physical assault or a struggle, though they did uncover 2 knife slits on his right wrist that had been covered up with a face mask.

The medical professional believes that the Malaysian man had died approximately 7 to 8 hours before the rescue workers had arrived. As of now, there were no reported suspicions of foul play or any other details available.

kmc
Covid kills in many ways, the majority being our reaction to it.

AlexPTY
Indian in the pool, Malaysian in the car. Are they shooting The Blacklist Season 9 in Thailand?