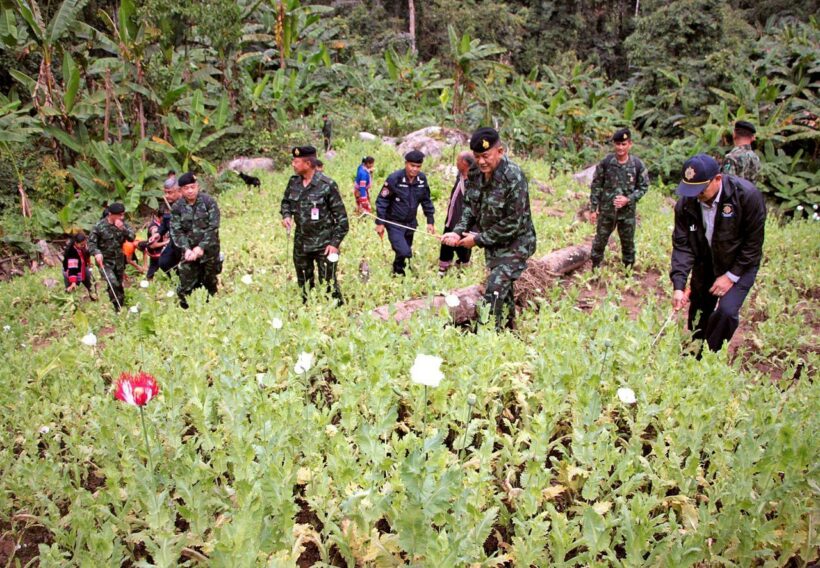 The cultivation of opium is on the decline in Thailand, but the illegal practice persists in several northern districts, the Office of the Narcotics Control Board reported this week.

Secretary-general Sirinya Sitdhichai cited remote rural highlands in Chiang Mai’s Om Koi, Mae Taeng and Chiang Dao districts and in Tak’s Umphang, Mae Ramat and Tha Song Yang districts as places where opium is still grown. He said it’s cultivated either by individual farmers for household consumption or by investor-backed farmers for local distribution. The plantations are kept small and scattered to avoid detection. Sirinya said the latest survey found that opium cultivation had dropped 40 per cent since a year previous. He credited strict law enforcement and the changing climate.

Chiang Mai had 168 plots on 120 rai, Tak 84 plots on 63 rai, Mae Hong Son 22 plots on 12 rai and Chiang Rai 39 plots on 18 rai. Sirinya said 210 plots covering 150 rai – 70.46 per cent of the total – had since been destroyed. Sirinya and Major General Jittiwat Sornsuwan, assistant commander of the Third Army Region’s Narcotics Suppression Operation Centre, on Monday led officials on an inspection tour of a plantation in Tambon Pongsa in Mae Hong Son’s Pai district.