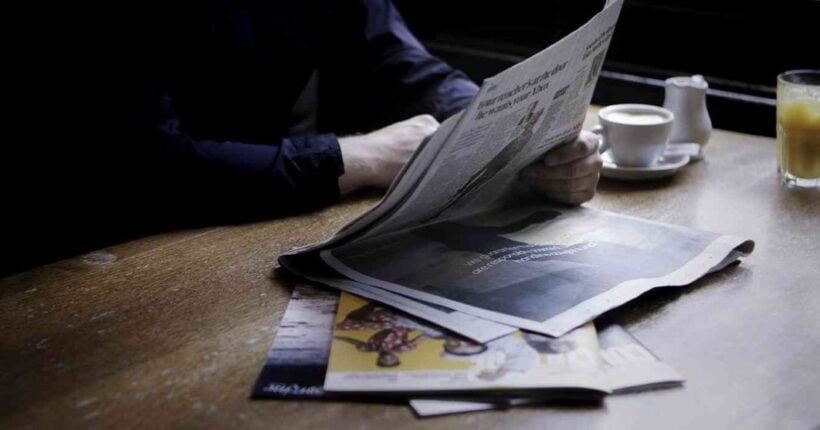 Sad news that after 48 years, The Nation Multimedia Group is shutting up shop on its daily newspaper.

It wasn’t entirely unexpected and is a decision that every newspaper has either already made, is constantly reviewing or will have to make in the future, probably soon. The Nation Multimedia Group’s CEO maintained that there would be no reductions in editorial staff. When these announcements are made there is always promises of a rosy online future and no reductions in staff. In reality there has to be a reduction in staff to make the transition from paper to online fiscally possible.

For The Nation it was somewhat of a perfect storm of problems that precipitated yesterday’s announcement to go online-only.

A hard core of expats, some of The Nation’s devout readers, are also finding it increasingly difficult to stay in Thailand. Take a long-term British expat for example, living happily on their UK pension and spending long days by the beach. With the British pound plunging against the Thai baht the real cost of living has gone up, a lot, for many of these long-termers. Then add the steadily rising costs of living in Thailand and new requirements for long-stay visas and the long days at the beach are getting more expensive and more complex.

The expat mix is also getting a lot younger. You guessed it, younger people are more inclined to read their news and seek information online.

Finally, the advertising revenue for newspapers is getting very thin on the ground. Newspaper advertising is expensive, non-intuitive and certainly not ‘real time’ as demanded by both readers and advertisers now. Business owners are moving away from newspaper ads when, for a fraction of the cost, they can directly target THEIR customers with an online ad. AND it’s totally measurable – more eyeballs on their product for a fraction of the cost.

The strong baht, falling exports and political uncertainty are also eating into business advertising spend and confidence as well.

There’s also a lot more choice for advertisers these days as the revenue creeps away from the old triumvirate of press, radio and TV. At the same time online platform traffic soars in numbers and new platforms and innovations get added every day.

The Nation’s daily paper is just another victim of the relentless technological march.

The people (me included) who used to make it a daily habit to trawl through the pages of the dailies are getting older, moving across to the online platforms, simply dying or leaving Thailand. At the same time a few thousand smartphones will be bought today bringing almost instantaneous news to their screens, along with hundreds of choices of media, opinions, formats and, yes, advertisements.

The sight of people travelling on public transport, or walking around, heads buried in their screens is scary to us ‘old-timers’. But the smartphone, and to a lesser extent tablets, laptops and desktops, is where people will increasingly source just about everything they need to know. They will ‘choose’ what they want to read, not some editor’s view of the world or slanted choices of news to publish.

It’s a sad day when any venerable banner, like The Nation, has to cease publishing but we, the consumers, have already determined their fate, and the fate of the remaining newspapers in Thailand, by making the move online. The publishers are adjusting to the new technology as well and following the new money-trail.

The Thaiger has an editorial partnership with the Nation Multimedia Group.