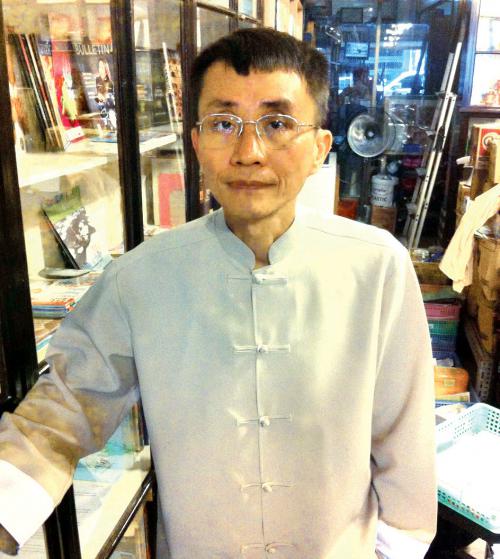 Phuket native Don Limnun-thaphisit, 49, is the project leader of Lardyai walking street and the head of the Phuket Old Town community. He graduated with a bachelor’s degree from Prince of Songkhla University in the faculty of Science.

Here he talks about the need to revive Phuket Old Town and increase the popularity of the Lardyai street market with tourists.

PHUKET: More than 8 million tourists arrive on Phuket every year to enjoy the enormous variety of attractions on the island, such as the beautiful beaches, throbbing Soi Bangla nightlife, temples and the Sino-Portuguese architecture in Phuket Old Town.

However, according to a report last year, only one per cent of those tourists actually made it out to see the beautiful and rich culture of Phuket Old Town. That amounts to only about 80,000 tourists, and most of those probably spent less than an hour there.

We need help directing tourist-dollars into Old Town, because right now tourists only come and take a few photos before leaving – they put no money into the local economy.

I’m not sure why more people don’t explore this interesting and beautiful part of the island. Maybe it’s too hard to find parking places along the road, or the streets are too narrow to drive on.

While, those might be factors, I think the main issue is that tourists don’t think there is anything to do in Old Town except have a quick photo shoot.

If Phuket continues to only be famous for its beaches and not for its culture, then our unique culture will disappear. Old Town will soon become “Abandoned Town” if we aren’t careful.

Phuket’s culture is so rich with its incredible blend of Chinese, Portuguese, Malay and Indonesian cultures. We have local delicacies, local lifestyles and a traditional fashion called Baba Yaya. However, all of this is still being overlooked by most tourists.

These business owners have the added pressure of living in the most expensive province.

If we are unable to perk tourists’ interests about Phuket culture and generate income in Old Town, then the businesses there will close their doors and collapse.

We need to focus on building the entire economy of the province, not just the beachfront areas.

To do this, we need Phuket students to stay on the island after they graduate. We need their help in finding creative ways to improve Old Town. As it is, the sons and daughters of local shop owners do not want to run the family businesses. After they graduate they want to work in Bangkok, or anywhere that they can make more money.

This leaves only the elderly to run local businesses, and without a new generation to improve and expand family businesses, these institutes will be doomed.

Old Town is slowly becoming something like an ancient museum. However, not all the residents are giving up, which is why we are creating projects such as the Lardyai walking street to rejuvenate the area.

However, without support, such initiatives might not make enough of a difference. So please, support Old Town.

Phuket is well-known as the Pearl of the Andaman, but now it is time for tourists to look for alternatives to the beaches, and spend a night in Old Town to experience traditional Phuket.

Lardyai walking street is open every Sunday on Thalang Road in Phuket Old Town from 4pm to 10pm.