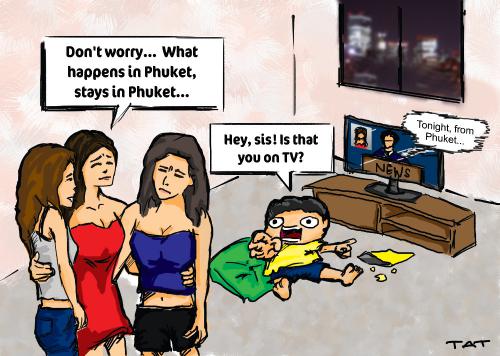 PHUKET: The recent claim of drink spiking by a young British tourist who survived a two-storey fall from her Patong hotel room is just the latest in a long string of similar accusations by foreign tourists, the vast majority of which go unreported.

Reliable sources in several units of the local Tourist Police have over the years said that claims of drink spiking are very common in the island’s nightlife entertainment districts, especially Patong. Such claims, whether true or not, tend to be sensationally reported in the international media and cast yet another pall over the island’s reputation as a safe, cosmopolitan party hub – especially when the alleged victim is an attractive young Caucasian tourist.

The case of 21-year-old Romany Mitchell ended far better than many that had come before. Injuries sustained in her fall, which allegedly resulted from trying to escape an assault by an unspecified assailant, were not permanently debilitating and she was released from hospital on crutches about 10 days later (story here).

Unfortunately, her withdrawal of a police complaint over the incident has ended yet another investigation that could have shed some much-needed light onto the murky subject of drink spiking in Patong (story here). The most recent case reported to conclusion was in 2011, when a gang of bar girls used drink spiking to rob tourists, apparently targeting middle-aged men. They were charged with illegal possession of prescription drugs (story here).

Though these women confirmed that they had robbed many tourists by dumping drug cocktails into their victim’s drink, it is probable that the vast majority of claims related to drink spiking are fabricated by people who, either consciously or subconsciously, seek to distance themselves from responsibility for their own actions while under the influence of alcohol.

It is a convenient, albeit unimaginative way of shifting blame from oneself onto some nebulous scapegoat that can never be questioned, pinned down or held to any level of accountability. More often than not, reports of such claims surface in the international media when the alleged victim is young, female, and in the Phuket context, “farang”.

But with all these considerations in mind, and with the presumption that local police will struggle to battle against such slippery crime, there remains one very simple way of limiting the possible recurrence of such incidents: better enforcement of existing laws that forbid the sale of benzodiazepine drugs such as Xanax and Valium, which despite being classed as Category V restricted drugs are still openly sold over the counter at many pharmacies on the west coast.

These are the drugs commonly implicated in cases of drink spiking and date rape, yet authorities continue to look the other way, even though Patong has developed a well-entrenched reputation internationally as a place to stock up on dangerous, psychoactive pharmaceuticals.