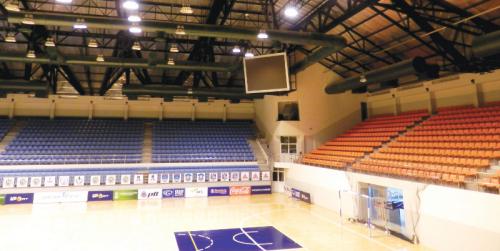 In addition to being the home of the Andaman Pearl, the stadium was also used for several different sporting events over the past few months, including Thailand’s most significant international basketball tournament, the TOA Thailand Open 2012, as well as the 2012 National Youth Games and the first-ever Phuket International Choi Yong Seok Taekwondo Championship.

In December, Phuket United were forced to buy polypropylene copolymer (PP) futsal flooring to install on the parquet flooring fitted by Phuket Municipality, who prohibited the team from using the stadium until a new floor covering was put in place.

Phuket Municipality has since banned Phuket United from training at the stadium without giving a reason, which means the team currently has nowhere to prepare before their home games.

Phuket United had the opportunity to play at Fashion Island Stadium in Bangkok, but declined in spite of all their troubles, choosing to remain in Phuket for their fans.

“If we want to make everything much easier we could play all of our games at the futsal pitch at Fashion Island in Bangkok. To rent the field in Bangkok is about half the cost, 20,000 baht for one match, compared with 43,000 baht to play at the stadium in Saphan Hin. But I would like the people of Phuket to see our futsal team, which consists of local young people. This will encourage children to take an interest in the sport,” said Samak Rattanadilokna, director of Phuket United.

The Phuket International Choi Yong Seok Taekwondo Championship also faced challenges from local government agencies. Choi Yong Seok, Thailand’s national taekwondo coach, claimed that the municipality did not support the tournament and made it difficult for organizers to gain funding for the event.

Because of this, the tournament, which attracted 1,500 competitors from Thailand, Korea, Russia, Kuwait and Australia (among others)will not be held in Phuket again. Tournaments such as these should be seen as a great way to attract tourism to the island and open up Phuket as a sporting hub.

Although the facility at Saphan Hin is clearly meant to cater to large sporting events, bureaucracy and backwards thinking is once again holding Phuket back.

Phuket Opinion: Praise for the little ‘Heroes’ of Phuket