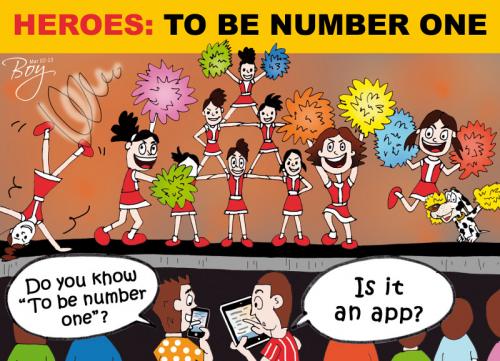 PHUKET: Although accorded little, if any, attention in the local media, the recent winning of a national championship in the “To Be Number One Teen Dancercise 2013” competition by a team of young dancers from the Baan Bangneaw Municipal School in Phuket Town deserves a great deal of recognition and praise. It was a considerable achievement, the first ever by a team representing Phuket.

Established 10 years ago by HRH Princess Ubol Ratana Rajakanya, the To Be Number One program offers Thai youngsters a chance to develop important life skills that include discipline and teamwork. These were the very character traits our ancestors needed to simply survive, yet they seem to be in increasingly short supply among youths in our modern world of digital information, video games, social networking and mobile phones.

Bangneaw School had two teams in the dance competition. The “Hero” team of 16 six-to-nine year olds won the southern finals at the Jungceylon complex in Patong in late November, then went on to win the national finals against 12 other teams at the national championships held at the convention center at The Mall Bangkapi in Bangkok on February 10.

Their 17 big brothers and sisters on the “Aha” team (10 to 13 years old) also qualified for the national finals by coming second in the southern finals. They then went on to take fourth overall in the highly-competitive national finals, where they also managed a second place overall last year.

The Phuket Public Health Office, recognizing the two teams’ achievements and hoping to encourage more schools on the island to enter teams in next year’s competition, recently held a brainstorming session with the parents of the young dancers to learn more about how their experience had affected the children and their families.

Most of the parents were quick to point out their own considerable personal sacrifices and investments of time and money associated with the training, but said they were well worth it, even though the daily practice sessions sometimes ran as late as 10pm – with no breaks for weekends or during the school holidays. In fact, these latter periods were the time when team coach Charintorn “Khru Pop” Thongsamer ordered the training kicked up to another level: all-day rehearsals.

Despite the considerable costs involved, the Bangneaw “cheer squad” was among the largest and most vocal at the finals in Bangkok – and they were clearly overjoyed when the Hero team not only won the national finals, but was also given a chance to perform their winning routine in front of none other than Princess Ubol Ratana.

The Phuket Gazette would like to congratulate all of the dancers, as well as their parents, teachers and other supporters, on a well-deserved victory that all of Phuket can be proud of.

This editorial first appeared in the March 2-8 print version of the Phuket Gazette.

Phuket Opinion: Playing by all the rules