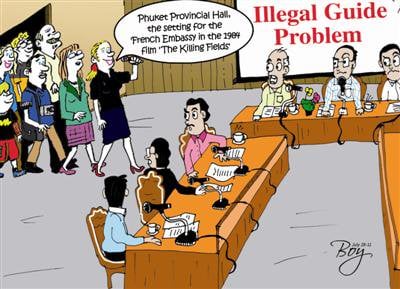 PHUKET: One chronic tourism-related problem that periodically bubbles to the surface of the local media here in Phuket is that of illegal foreign guides conducting tours for fellow countrymen.

While the problem was originally mainly centered around illegal Korean guides, its scope has expanded over the past decade due to robust growth in the inbound markets from both Russia and China.

The issue was raised once again at a meeting in Phuket earlier this month, when Phanomphon Thammachartniyom, adviser to the Senate Standing Committee on Tourism, said he had been trying to stamp out the problem for more than 10 years, but to no avail.

In response to claims by the Tourist Police that their investigators had been unable to find any evidence of illegal guides working in Phuket, Mr Phanomphon pointed out quite rightly that: “If you spend three days at some of the popular tourist venues, such as Wat Chalong and Laem Phromthep, you would find a hundred of them.” As any long-time resident of the island is well aware, Mr Phanomphon is right.

From a broader perspective, the illegal guide problem falls squarely into the wide range of “illegal-yet-common” practices in Phuket that can only continue if law enforcement officials are either too lazy to take action, or are “actively encouraged” to look the other way.

While a payoff here and there might seem innocuous enough, especially to those on the receiving end, the cumulative effect of this “culture of corruption” manifests itself as a cancerous growth on our society. Even the environment that sustains us all is at risk, as clearly demonstrated by the vast plunder of our forest reserves at the hands of rich “investors” and the officials whose palms they grease in order to steal these reserves from future generations.

While Thai labor law is notoriously vague in defining what actually constitutes “work”, it is nevertheless quite specific about the circumstances under which foreigners can be issued work permits. Chief among these is “when qualified Thais cannot be found” to perform such work.

The lack of Thai guides with the mastery of Korean, Chinese and Russian languages is clearly demonstrated by the number of illegal guides from these countries in Phuket. But despite this, the “tour guide” profession remains one of the many reserved for Thais under current law.

We suggest that the government consider changing this law to allow qualified foreign guides from these countries – those who have sufficient knowledge of Thai history and culture – to be issued work permits. These guides could then join the ranks of law-abiding, tax-paying foreigners who have done so much to help develop the Thai tourism industry over the years – rather than serving to further enrich corrupt or lazy officials.

Phuket Opinion: A caveat for Toh Seh Hill, and a hint for politicians