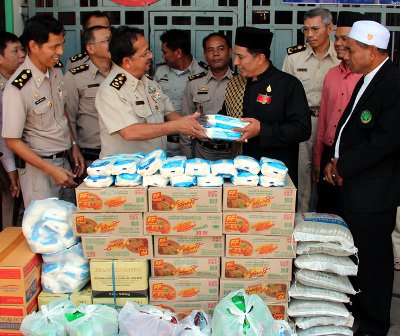 PHUKET: The Phuket Islamic Committee gifted food items to Muslim inmates at Phuket Provincial Prison on Thursday so they could properly partake in Ramadan.

At 11:30am, Phuket Islamic Committee President Komon Doomluck handed over rice as well as other dried foods, such as palm dates, which are the traditional foods for breaking fasts, to the 225 male and female Muslim prisoners in the facility.

“In the month of Ramadan, the Phuket Islamic Committee and Phuket Provincial Prison held a sermon to bless the prisoners and to celebrate HM Queen Sirikit’s 80th birthday and HRH Crown Prince Maha Vajiralongkorn’s 60th birthday.

“The sermon was held on Wednesday. So today [Thursday] we offered food to the prisoners,” said Pol Sgt Maj Komon.

He went on to explain that Muslims partake in Ramadan to prepare themselves mentally, physically and spiritually.

“To properly fast you must think positively about yourself and others. You must avoid bad thoughts and bad actions,” he said.

During Ramadan it is forbidden for Muslims to eat or drink between 4:30am and 7pm, he explained.

It is also forbidden for Muslims to have sex during Ramadan, he added.

“Allah declared this month an important month for Muslims. It is a month of forgiveness, and a month to make good things happen,” he said.

“I would like to ask all Muslim brothers who have faith to fast for Ramadan and pay respect to Allah. I wish Allah blesses you all so you can only do good things.”