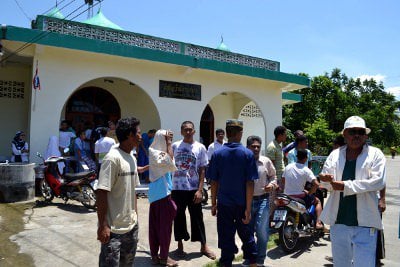 PHUKET: Eyewitness reports are now indicating that the student who died after escaping a youth drug rehab facility in Krabi last week was not beaten to death by teaching assistants, as initially reported, but rather drowned during his escape.

Allegations that student Maha Manitaya was beaten to death by the teaching assistants at Por Noh Klong Gom School prompted more than 200 fellow students to flee to a nearby mosque on Thursday.

Another 200 students have since fled the facility, prompting the school director to close the school temporarily.

Maj Chadchai Nakpaksi of the Krabi Police told reporters that Abdulalima Ha, Mr Maha’s partner in the escape, said that his friend did not die from a violent beating by teaching assistants, but rather drowned while trying to swim across the Krabi River.

“Mr Abdulalima said he and three friends broke out of the rehabilitation camp on July 21. They split into two different groups and hid in the mangrove forest for one night,” explained Maj Chadchai.

“The next day, they all attempted to swim 500 meters across the Krabi River to reach Krabi Town, where they hoped they would be able to catch a bus home.

“About 300 meters from the shore, Mr Maha succumbed to fatigue and started to go underwater. Mr Abdulalima yelled to fishermen in the area to help his friend,” he said.

It is unclear from Maj Chadchai’s report who pulled Mr Maha from the water. However, he was allegedly pulled out alive, but died onshore about five minutes later.

“Mr Abdulalima explained that he was taken back to the school by the teaching assistants and was kicked three times, but did not sustain significant injuries.

“He said he later got into a fight with other students back at the school and received a wound to his forehead that needed stitches, which is why he was sent to Jariyatham Ruampad Hospital in Krabi Town overnight,” Maj Chadchai explained.

“Once he was discharged from the hospital, we questioned him about the incident. He said it wasn’t true that his friend was beaten to death by teaching assistants and his injuries were not caused by them either,” he said.

The other two members of the group of four who escaped that day have made it home safely, he added.

Krabi Provincial Police Commander Jamroon Ruenrom explained that his team had already questioned Mr Abdulalima and received his account of the incident, but that the cause of Mr Maha’s death had yet to be determined.

“The incident took place quite a while ago [July 21], but the police weren’t informed about it. They will now have to question everyone who is involved in the case before any conclusions can be made,” said Maj Gen Jamroon.

Three military trucks from a Royal Thai Army base in Krabi have already taken 200 of the students to their homes in the Deep South, he said.