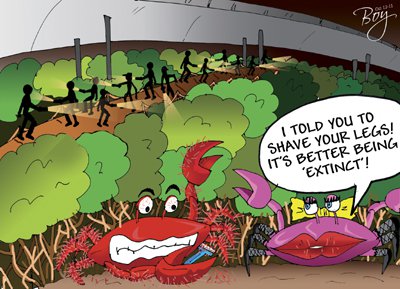 PHUKET: With more than 50 injured turtles and a dolphin recovering amid news of an “extinct” crab resurfacing in Phuket, one cannot help but reflect upon the state of our island’s current fight for ecological survival.

The breathtaking increase in development’s toll on the island’s natural resources has been reported by the Phuket Gazette for well over a decade. The same goes for the “re-reporting” over the years of all the claims by officials that they were aware of the potential consequences of over-development and were thus working hard toward a “sustainable” future. But those claims fly in the face of the Phuket bureaucrats who have been issuing building permits at a rate equal to, if not greater than, the issuance of fraudulent title deeds conferring “ownership” of national park land.

Yet the crab comeback is good news and underscores the truth that if you leave nature alone long enough, she will heal herself. The fact that the rare crustacean resurfaced within scuttling distance of the proposed site for the long-awaited Phuket International Convention and Exhibition Center (ICEC) may be mere coincidence, but it certainly deserves attention.

Plans to build the multi-billion baht ICEC at the north of the island have been stalled by the Cabinet since the Pheu Thai Party rose to power over a year ago. The mighty ministers’ objections are allegedly based on the ecological impact of such a facility on the natural surroundings of the area, as supported by the project’s failure to pass its Environmental Impact Assessment (EIA).

However, under the current central government, environmental impact assessment of a project in Phuket province could be a somewhat subjective process, unlike the fact-based understanding that the Chiang Mai ICEC is ready to open its doors this month, followed by an official launch next month with its first international convention. That center, approved and funded years ago with 1.8 billion baht by the Democrats, is expected to boost the meetings, incentives, conventions and exhibitions (MICE) events business in Northern Thailand by 10% to 15%.

Politics aside, the EIA argument against the Phuket ICEC location at Mai Khao is still strong, and re-ignites the decade-old debate about where to site the center, with Saphan Hin, on the outskirts of Phuket Town, not long ago being a leading contender.

If coincidences like these keep occurring, then perhaps all we are waiting for now is a push for the Phuket ICEC to be built in Phuket Town. Then we could argue about the “ecological” impact there.

After all, it is the same Cabinet that is objecting to the Phuket ICEC being built near mangroves in Mai Khao that also approved, with lightning speed, a dual-lane flyover right through a protected mangrove forest in Saphan Hin.