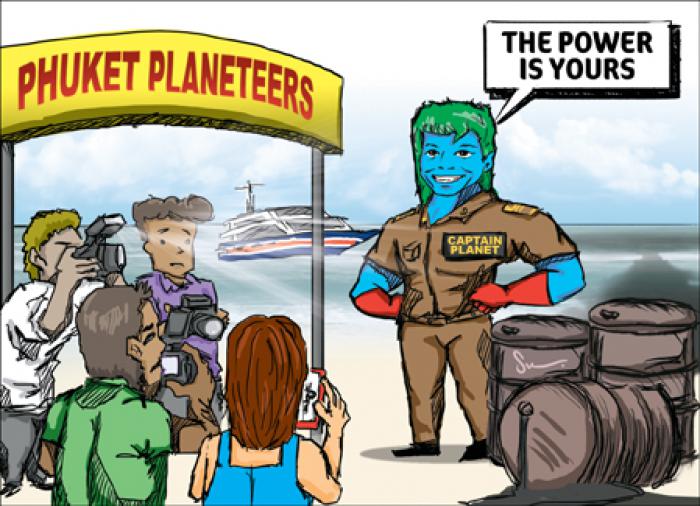 PHUKET: Everyone should get behind two recent appeals for public participation in protecting our marine and coastal resources.

Earlier this month, the Phuket Marine Office encouraged the public to provide photographic evidence to bring to justice people so ignorant that they actually still dump used petrochemicals directly into the sea surrounding our resort island. The entreaty came with the promise of a tidy, 10,000 baht reward if all of the conditions were met (story here).

His request followed the discovery of an enormous fishing net found, and thankfully removed, by divers at Shark Point (story here).

For an island that depends on its natural resources to support its tourism industry, Phuket has an abysmal environmental conservation record. Huge slum communities with little or no public planning now cover what was pristine mangrove forest just a generation ago; an ever-increasing number of sprawling residential estates continue to spring up, covering vegetation with concrete and producing untreated sewage which flows into the sea, even at our most popular beaches.

Relying on authorities to adequately enforce environmental laws is a failed strategy. The evidence for this assertion is in our faces, and even up our noses, every day. Even the easiest of laws to enforce, such as those that restrict double parking on the congested streets of Phuket Town, seldom if ever result in police action. One city parking attendant recently said that calls to police over such violations so rarely resulted in action that most of their ranks had ceased even trying to contact them at all.

Elsewhere, people tend to follow the rules, not just out of fear of being arrested or fined, but because it is the right thing to do. The Phuket Gazette applauds the dive community for trying to conserve our natural resources and for setting a great example for society at large. But we all need to do a better job at shaming those who break our laws,whether it be by photographing oil dumpers, beeping our horns at those who feel entitled to park their vehicles wherever they want, whenever they want – or even catching police in the act of breaking the very laws they are sworn to uphold.

Fortunately, the technology now exists to deputize the masses. Many of us carry mobile phones with cameras that can directly upload to social media sites, making it possible to report violators in real time.

We have strong environmental laws that need better enforcement, and it is up to each and every one of us to help.

Phuket Opinion: Extending a helping hand at the hospital