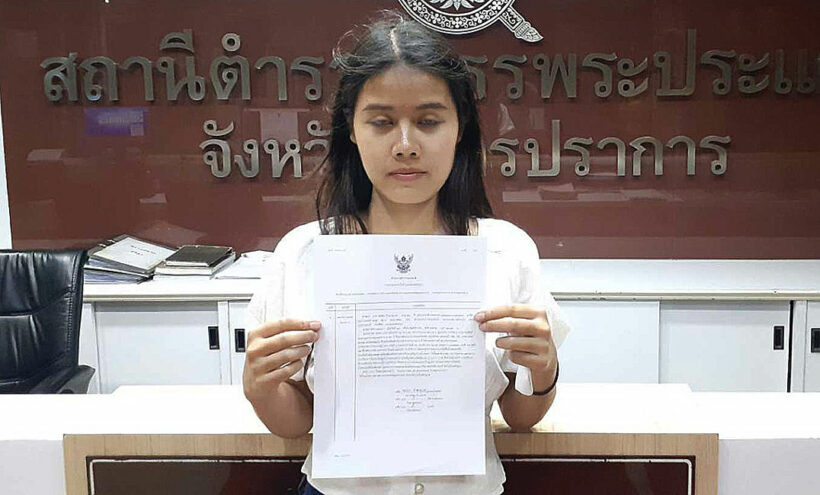 PHOTO: Pornthida Chamnanwet with her formal complaint about the missing winning lottery ticket, and her husband who stole it – Sutthiwit Chayutworakan

A 34 year old husband has left his wife stranded at home. He disappeared with their winning lottery ticket from Saturday’s draw. The winning ticket is worth around 6 million baht.

23 year old Pornthida Chamnanwet has made a formal complaint to police that her husband has disappeared, along with the winning ticket, even though, she claims, the couple had agreed to share the money equally. Pornthida is from Ubon Ratchathani and filed her complaint at the Phra Pradaeng police station yesterday morning.

They had cashed in their ticket for prize of a few hundred baht with a local lottery vendor on November 9 and then bought two more lottery tickets for Saturday’s draw (there are two draws per month). The wife said she chose one of the two tickets they bought.

The ticket she chose, 017223, won 6 million baht as the first prize in the draw on Saturday afternoon.

The jubilant couple went to the Phra Pradaeng police station to register their win and had their photos taken with the winning ticket. They then returned to their rented room. Pornthida told police that they agreed to divide the 6 million windfall equally and were planning how they would spend their share.

Then, on Sunday evening, Pornthida told police that her husband said she could only have 2 million baht on the 6 million baht prize. Then they had argued. Her husband told her to “go to court”, and left the house with the winning ticket.

Pornthida has asked if police can prevent her husband cashing in the ticket. She says she will also ask the Government Lottery Office to block any payment.