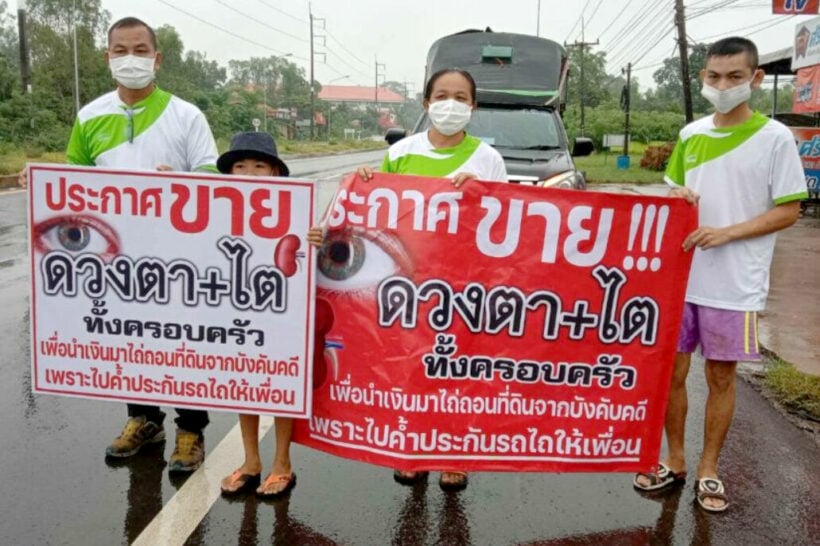 PHOTO: A family offers to sell eyes and kidney to save their home. (via Facebook สำนักข่าวธรรมาภิบาลโพสต์)

After signing as a guarantor for a lifelong friend’s tractor purchase who defaulted, a man and his family in Ubon Ratchathani are trying to sell their eyes and kidneys to save his home and farm. The man, along with his wife and 2 sons, is currently walking 100 kilometres in the rain from their home to the provincial capital where PM Prayut Chan-o-cha will visit tomorrow to plead for relief.

The family had placed 2 vinyl signs in front of their home advertising their eyes and kidneys, or any other organs, for sale from all 4 family members if it would raise the 860,725 baht needed to save their home and their 9 rai of farmland.

After that failed to attract buyers, they took the signs and began walking in the rain to the provincial capital. They have been greeted on their walk by residents along the road who learned of their story and came out to offer support.

The heartwrenching story started in 2014 when the 48 year old man, who works as a radio DJ and in local government for Jead tambon administration organisation in Khemarat district, agreed to co-sign on a tractor purchase for 860,000 baht for his friend’s wife. His friend is a local policeman at Na Tan Police Station whom he had known since childhood, with a stable job, so he agreed to sign.

But soon after, payments were missed, and by 2016, the family had been served a warrant as a second defendant in a default case. His friend promised it was under control and being mediated, but when the court ordered the tractor returned along with depreciation fees, the wife did not return it.

Last year, the Legal Execution Department notified the family that their land and home were being seized and auctions, but it failed to attract a buyer at 2 auctions, though it is up for auction again on October 16.

Desperate and out of ideas, the panicked family devised the plan to raise money to pay the 860,000 debt and save their house and farm by selling their organs. Now they are walking the 100 kilometres with their sign to raise awareness and hope for a meeting with PM Prayut to ask directly for assistance.

AlexPTY
selling organs or asking PM for something is as stupid as co-signing for anyone on a loan application
Paco
10 hours ago, GuyIncognito said: This was years ago no they are using social media to beg for money, som nom na mofos Correction...Asking for financial help... because they ended up in a problem they can not handle or solve…