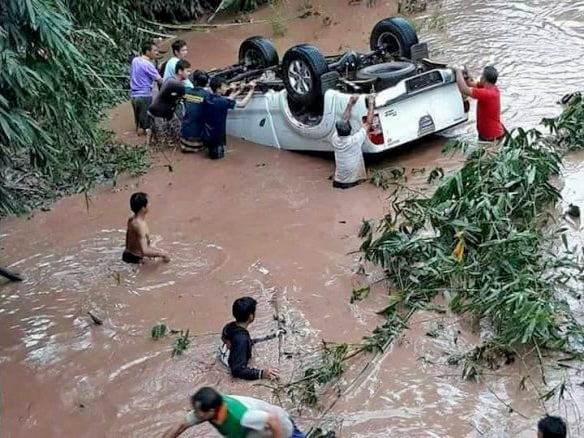 Floods in 21 provinces, mostly in the North, Northeast and Central regions of the country, have killed at least nine people and affected more than 300,000 others over the past two weeks, the Department of Disaster Prevention and Mitigation have reported.

Areas of low pressure and heavy downfalls since October 10 have inundated 2,637 villages and more than 120,000 households, it said. As of yesterday, 19 provinces remained flooded.

The water almost covered many house roofs, while a car and two pickup trucks were swept away. The authorities said there were no immediate reports of deaths or missing people.
At the same time, runoff from the Phu Anglung Mountain hit Ban Huay Tad in Tambon Khok Ngam, Dan Sai district. A canal’s banks overflowed to inundate the area’s main road and business district. 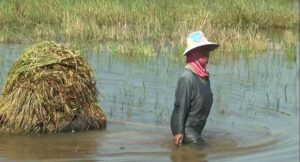 Riverside sandbag embankments in the northeast of Kalasin province are being raised in anticipation of more runoff from an upstream dam.

The huge volume of water being released from the Ubolrat Dam in Khon Kaen has already flooded Kalasai and Khong Chai districts in Kalasin.

Kalasin governor Kraisorn Kongchalard ordered that 50,000 more sandbags be added to embankments along the Chi River, raising their height by 50 centimetres.

In areas by the Wang Yang dyke in Khon Chai, the river level is nearing that of 2011, when there was severe flooding.
In the Central region, the downtown area of Angthong province’s Muang district was hit by flash floods late on Sunday night following hours of heavy rain. Officials rushed to drain the floodwaters yesterday morning but discovered that one of the main water pumps had broken down, said a local official, Somyos Joijchurassamee. 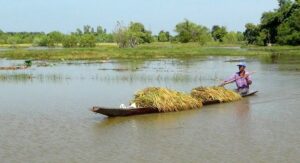 The business area and the government complex were swamped by about 40 to 60 centimetres of water. Also flooded were low-lying areas around the market, the main intersection in the heart of the town and Wat Ang Thong school.

The Chao Phraya River level rose to 8.75 metres, within a metre of the 9.32-metre banks in front of the Angthong provincial hall. Water was flowing at a rate of 2,535 cubic metres per second yesterday morning.

Residents of six Ayutthaya districts were warned yesterday to brace themselves for worsening floods after Irrigation Department officials decided there was a pressing need to accelerate the release of water from the Chao Phraya Dam.

Park chief says they have proof that dugongs are being hunted