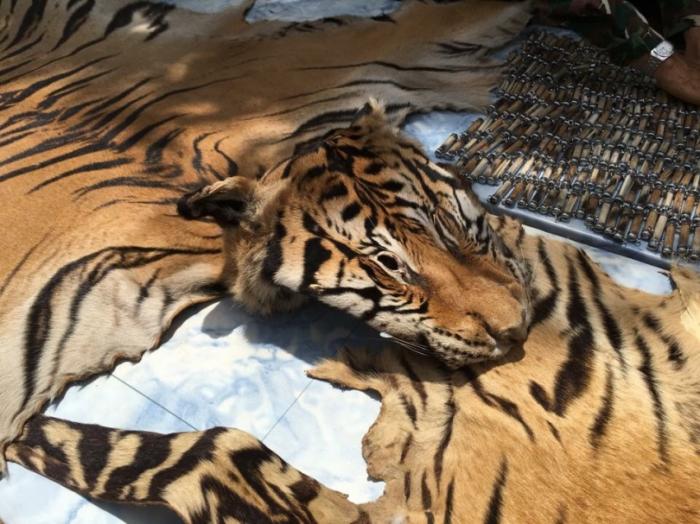 Stickers touting ‘Supplementary Food: The Power of Tiger’ and ‘Young Antler Herbs’, were found inside the temple yesterday. One monk was among those arrested, after authorities caught three men attempting to smuggle out animal skins, amulets, engraved fangs and equipment used to cut antlers into a powder, in a truck leaving the complex.

Their arrest led to a raid of the uninhabited living quarters of abbot Luang Ta Chan, where a sizeable number of tiger skins and tiger amulets were found, hidden inside alms bowls.

“We suspect that monks might have been taking the tiger skins out of the temple under the pretext of doing their usual morning alms rounds,” said Adisorn Noochdumrong deputy director-general of the Department of National Parks, Wildlife and Plant Conservation (DNP).

“We have found more than 50 jars of pickled stillborn tiger cubs,” Mr Adisorn said. “As of right now, we are trying to locate the more than 20 tiger cubs that seem to have disappeared from the temple, despite being present for tourists to bottle-feed until very recently.”

The revelations over the suspected trade in exotic animal parts at the Tiger Temple, which once attracted hordes of tourists, have made international headlines. On Friday, the United Nations Environmental Program issued a statement:

“The reported discovery of 70 dead tiger cubs, as well as tiger skins, talismans and other wildlife parts in a Buddhist temple in Thailand is a shock to many around the world. While circumstances of their death remain unclear, sadly, those tiger cubs represent only a tiny proportion of the enormous extent of an illegal trade in wildlife that is pushing species to the brink of extinction. Indeed, only around 4,000 tigers are left in the wild. Until the illegal trade in wildlife is stopped, we are only likely to see more of these types of situations…

…The commendable action by Thailand’s authorities, coordinated by the Department of National Parks, Wildlife and Plant Conservation, highlights the need for constant vigilance by wildlife law enforcement authorities to the threat posed by traffickers.”

However, Mr Adisorn refused to confirm the accusation immediately.

The abuses were discovered after the DNP team began relocating 147 registered tigers out of the temple. So far, 104 of the tigers have been removed.

The tigers are being housed at two state-run breeding stations in Ratchaburi.