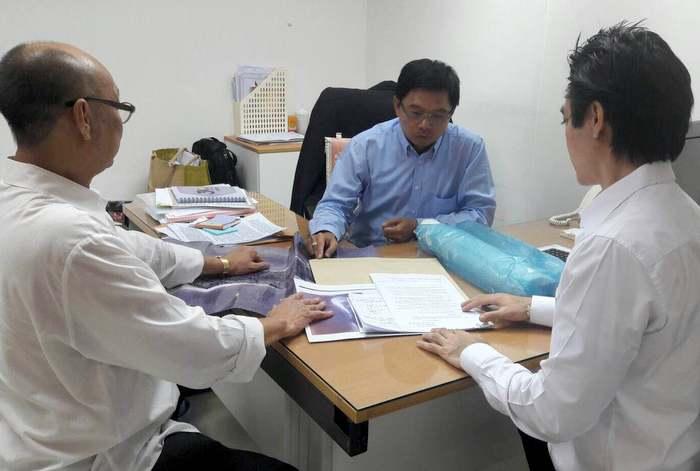 PHUKET: The owner of a land company claiming 24 rai on Naka Noi Island is petitioning the Land Department director-general in Bangkok, after a committee voted to revoke his company’s land documents.

The land dispute over parcels of Naka Noi, some three kilometers off Phuket’s east coast, has long been a source of controversy, with reported sightings of armed gunmen (story here), as well as the involvement of Phuket Governor Chamroen Tipayapongtada and Thai actor Puri Hiranpruk’s family in the conflict over ownership (story here).

Chanwit Kitlertsiriwattan, the owner of Six Mountains Co Ltd, went to the Land Department in Bangkok with supporting documents for his ownership, including an aerial photograph from 1967.

“The picture shows that people have been using this land for a long time and that our property does not overlap any protected forest,” Mr Chanwit said.

Mr Chanwit delivered a letter, reportedly asking for justice, to the Land Department on Tuesday.

“The committee’s decision is an initial suggestion; the final decision will be up to the Land Department director-general,” said Phuket Land Office Chief Watcharin Jetanavanich.

The Department of Special Investigation (DSI) has been looking into the validity of the land documents and attempting to trace ownership of the parcels on the island in order to sort out the dispute.

Prawut Wongseenin, director of the DSI’s Bureau of Consumer Protection and Environmental Crime, said that in 2014 Six Mountain’s SorKor1 #70 was upgraded to a NorSor3Kor for a plot of land on Naka Noi.

“When the documents were upgraded, the size of the plot changed from about seven rai to about 17 rai,” Lt Col Prawut said. “With the new size, the plot is now bordered by the ocean on two sides.”

Col Prawut said that the NorSor3Kor #3977, which outlines the current boundary claims of 24 rai, was believed to have been issued by using a flying SorKor1 from the other plot.

On July 30, 2015, the same day that the land document was upgraded, it was immediately sold to Six Mountains for more than 42 million baht (story here).

Mr Chanwit said that his company will gladly provide additional documentation if needed.

“I am confident that the Land Department officials will give us justice. They were, after all, the ones who issued us the land documents to begin with. We painstakingly went through every hoop of the legal process before trying to develop the land. Therefore, we hope officers will carefully reexamine the case and reconsider their vote,” Mr Chanwit said.

Ministry of Farang Affairs: Waiting 20 minutes for a roti