“The director admits there were many times when he was sure Toon couldn’t possibly finish his mission.”

A documentary comes out next month and follows the epic run led by Athiwara ‘Toon’ Khongmalai when he ran Thailand – south to north – to raise funds for Thailand’s public hospitals.

The trials, tribulations and triumphs captured on 16,300 minutes of footage filmed throughout the 55 day journey of rock star Toon as he ran from Betong, Yala in Thailand’s deep south to northernmost district of Mae Sai, Chiang Rai, are being told in the new documentary “2215 Chuea Baa Kla Kao” coming out on September 6.

The “2215” in the title, which translates as “2215, Belief, Crazy, Brave and Take a Step”, refers to the 2,215-kilometre journey that Toon undertook at the end of last year – slightly more than his planned run of 2,191km. That increase was down to his stops in different place along the way, as he went to local schools, visited the elderly waiting to donate money for the project and to government offices.

In the end, Toon’s overwhelmingly successful crosscountry run raised more than 1.2 billion baht for 11 public hospitals across the country.

In a nice twist, duty free giant King Power is expressing its thanks to Toon’s efforts by covering the admission price of 720,000 tickets so that Thais can watch the documentary for free between September 6 and 16. It is estimated that this will cost King Power some 144 million baht over and above its already generous donation of 100 million baht during the charity run.

“This is how I wanted to pay back the people who supported me during the run. They gave that support for free and now it’s time for me to give back,” says Toon.

Many Thais, of course, watched the live broadcast of the 55 day run and director Nottapon Boonprakob is quick to explain that the documentary contains plenty of behind-the-scenes footage that adds to the power of the story.

“The live broadcast really only shows Toon and his followers running. Through this film, we want to portray what drove him to undertake the mission, how he was able to succeed and what pushed him to complete it despite the many obstacles and injuries,” says the director.

With so much footage to choose from, Nottapon has carefully selected the scenes that tell the real story of the marathon journey.

“I don’t want to over praise him as a hero but portray him as an ordinary man with a passion to do something for others and an individual who can be weak and feel pain like anybody else. The documentary shows the unseen parts of the journey and gives us a better understanding of this man,” says the director.

Nottapon adds that this is not a conventional documentary with interviews and flashbacks. Yes, it does contain a few interviews but mainly relies on events and situations to reveal Toon Bodyslam. The idea for the documentary was initiated by Toon himself, when he approached GDH a while back to ask whether they could do anything with the footage of an earlier run from Bangkok to Bang Saphan in Prachuap Khiri Khan. He later amended his request, telling the studio he would be running from Betong to Mae Sai. Producer Wanruedee Pongsittisak thought it was a crazy idea but was nonetheless happy to support the project.

“I joined Toon’s first charity run Bangkok to Bang Saphan – and was overwhelmed by the positive energy along the route, so of course I was happy to support him,” Wanruedee says.

GDH handed the project to Nottapon, who had previously worked with its former incarnation of GTH as a scriptwriter for the movies directed by his elder brother Chayanop, namely “Suckseed” and “May Who?” He has also directed TV commercials and music videos and took the Social Documentary Film course at the School of Visual Arts in New York City.

After a recent screening of the documentary, Toon remained silent. The nervous production team put his quietness down to the fact that he probably didn’t like the film.

“It is not that I don’t like it,” he said later. “The point is I have my own picture and the movie collects valuable information along the run, by not focusing on me. But after they explained why they opted to present this way, I don’t have anything against it.

“The story should create a force or inspire people to do something that benefits them personally or the wider society such as starting jogging or taking care of their health. That was my intention and I hope the documentary will achieve that aim,” says Toon.

The director opted to keep the crew small, selected four people to man the two cameras and two more for editing. The two camera teams followed the run from the beginning, shooting on two motorcycles or from the top of a car and capturing interesting moments along the way including the cheering crowds along the road. They also followed Toon in the car he used to rest. At the end of each day, the two editors would go through the footage and write the daily record.

“Shooting this movie was tough and exhausting work as we had to carry the camera all day long. The camera broke and we had an accident but how could we complain when we saw him running even though he was tired?” says the director.

The trailer shows Toon crying out in pain when the doctor treats him for an injury – and there were several during the run – and as he relaxes in the private area, scenes that were not included in the live broadcast. Like many people who witnessed the run, the director admits there were many times when he was sure Toon couldn’t possibly finish his mission.

Watch a preview of the documentary here…

“His fitness preparation wasn’t really designed for a crosscountry run because he continued to work hard, didn’t get enough rest and didn’t even manage his diet, all of which are essentials to prepare the body for a tough mission,” he says.

Free screenings will be available from September 6-16 nationwide at Major Cineplex and SF Cinema and limited to one show a day during weekdays and two screenings a day on weekends.

Toon will also take the movie on a road show nationwide from September to February and hold activities like short charity runs along with screenings.

Donations can be made through different channels: at the donation box, using the QR code via mobile banking, by SMS or through SCB Bank account 0163045567. 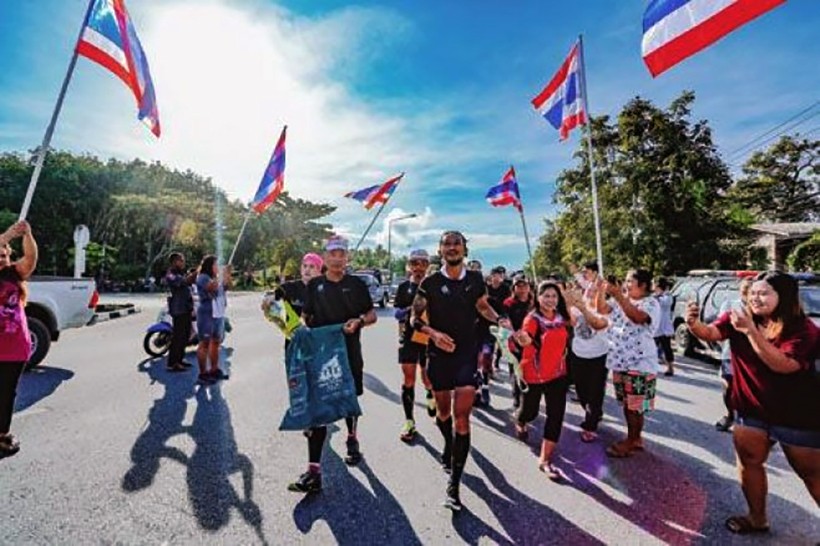 Warning for boats going to sea until August 19