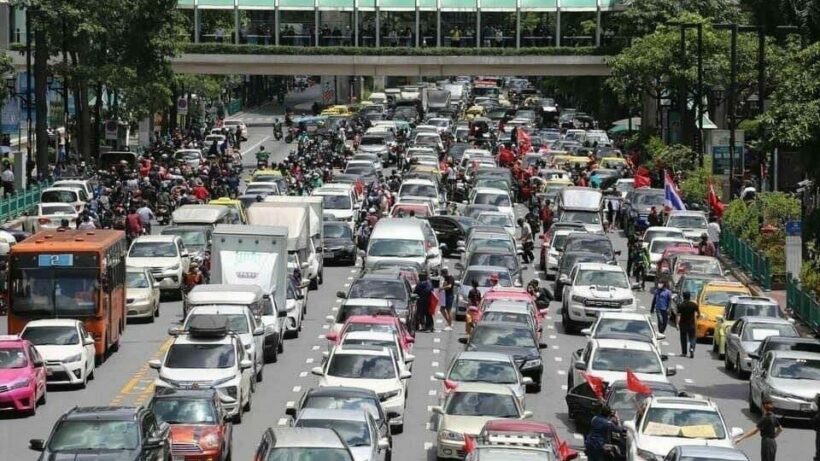 The police have expressed their concerns that the rallies might stop traffic in the region after rally organisers shared their “car park” protest plan.

An armada of protesters’ cars are set to convene at the Ratchaprasong intersection and the Democracy Monument and Ayutthaya at 2 pm today, and then departing an hour after that.

Then, at 6 pm, the protesters will sound their car horns. After that, they will disperse.

Yesterday, MPB deputy commissioner Jirasan Kaewsang-ek warned of traffic delays due to the protests. However, Police will be at the scene to help with the flow of traffic, today.

Pol Maj Gen Jirasan says the police are at risk of being hurt because of skirmishes with protesters, which he says makes it hard for the police to assist people “in distress”.

The MPB has requested City Hall repair damage to traffic lights/closed-circuit cameras. They also plan to sue protesters for damages.

Kissana Phatthanacharoe, the deputy spokesperson for the Royal Thai Police, says police acted within the law with their “crowd control measures” when dealing with protesters. He says police told protesters to stop the rally but the protesters declined. He says “some” of the protesters then attacked police who were forced to use “anti-riot equipment”. Such equipment has previously been condemned by Amnesty International.

The government has previously tossed around the possibility of pressing charges against the parents of young protesters.

Phuket restrictions to stay in place until at least the end of the month, exemptions apply