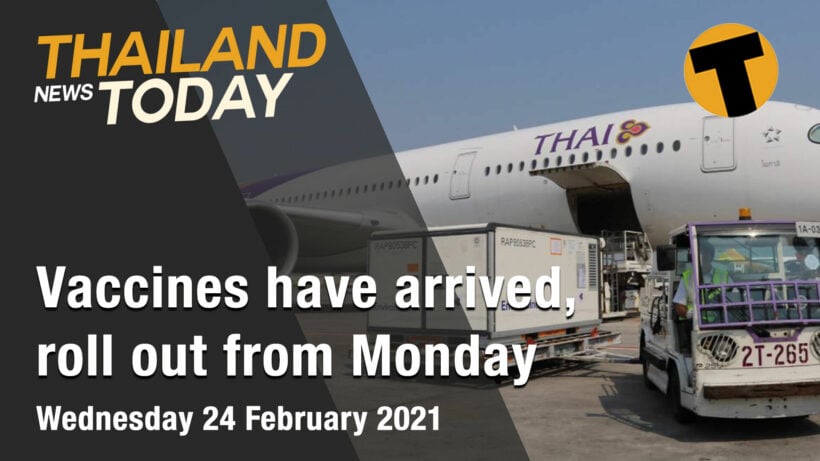 In today’s Thailand News Today, the government is at least now talking about lifting the mandatory quarantine, the first Covid vaccines will start in Thailand next Monday, and protesters change gears and go after alleged corruption in the Thai police force. We’ve also got a special report about the latest in the Thai Airways saga, all on our YouTube Channel. Let’s get started….

The Thai PM, Prayut Chan-o-cha says the government would now consider waiving the mandatory 14 day quarantine for tourists with proof of a Covid-19 vaccination. For months now, the government has stuck to its stance that vaccinated foreign arrivals would still need to be quarantined, given that it’s too early to say if vaccines prevent transmission. But with industry leaders warning that the economy is on the brink of collapse, the only hope appears to be reviving the tourism sector, a major economic contributor prior to Covid-19.

Even the Thai central bank says the uncertainty facing the tourism sector is a major threat to medium term economic growth. The bank Governor says it would be very difficult for the economy to recover to pre-pandemic levels without the return of international tourism.

Tourism officials have been pushing for Thailand to introduce a vaccine passport policy that would allow tourists to return from countries where mass vaccination programs are now underway.

Meanwhile, Thailand took delivery of its first doses of Covid-19 vaccine today, with the arrival of doses of the Chinese Sinovac and AstraZeneca vaccines. A Thai Airways International plane carrying the vaccine from Beijing landed at the airport at 10.05 this morning.

The shipment included 2 million doses, valued around 1.2 billion baht, the government ordered from Sinovac Life Sciences of China. Those 200,000 doses will be stored and checked in a warehouse until Friday.

The national inoculation program is expected to get underway next week, with frontline medical workers and other vulnerable groups first in the queue.

He said… “Many companies have shown interest to register but their documents are not completed yet. It is good that we will have more vaccines than the 65 million doses planned by the government now.”

The CCSA says 4 of Thailand’s major tourism destinations are to be prioritised in the distribution of vaccines. They are Phuket, Chon Buri, Chiang Mai and Surat Thani. In addition, a further 9 provinces with significant infection numbers are being prioritised in the rollout of the first vaccine doses.

70,000 doses will go to the hard-hit “highest control” area of Samut Sakhon, where Thailand’s second outbreak cluster was first detected on December 20 last year. 8,000 doses are being set aside for medical officials in the central province, along with 6,000 for frontline healthcare workers, 46,000 doses for seriously ill patients, and 10,000 doses for migrant workers and local residents.

The pro-democracy group, Ratsadon, held a rally in Bangkok late yesterday, this time with their sights set on Thailand’s police force and the alleged corrupt practices involved in the promotion system. The system, where officers have to pay bribes to senior figures, allegedly including senior politicians, was highlighted in a debate in parliament last week.

Activists met at the Ratchaprasong intersection in the capital around 5pm and stayed there for an hour. But many of the speakers were new faces, with some of the more prominent leaders notably absent, currently languishing in police custody. Those who addressed the crowd called on “honest” police officers to join them in the fight for justice, as they slammed the widespread nepotism and corruption that is allegedly rife in the Thai police force.

Protesters then marched to the nearby headquarters of the Royal Thai Police and sat on the street outside while speeches continued. At one point, an activist read out a letter which the group says was written by a police officer and addressed to his colleagues. In it, the officer calls on his colleagues to decide if they are serving the people or those in power, and asks them if they think they’ve been fairly treated by their bosses or used for political purposes.

Thai Vietjet has announced the flight resumption of its domestic cross-regional service between Phuket and Chiang Rai, in response to the increasing travel demand after the government began relaxing travel measures around the country. The airline will resume the service for four round-trip flights a week on Monday, Wednesday, Friday and Sunday, starting from this Friday.

The airline also announced the resumption of other domestic cross-regional services including the flight between Hat Yai – Chiang Rai and Chiang Mai – Nakhon Si Thammarat from 19 March 2021 onwards.

The airline has launched a special promotion called “Welcome Back to the Sky”, offering special fares from just 99 (not including taxes, fees, surcharges, and add-ons) for Thai Vietjet’s flights between Phuket – Chiang Rai and any flights to and from Suvarnabhumi Airport.

Other domestic carriers are also starting to ramp up the resumption of flights. This weekend, being a long weekend, has seen increased bookings for the sector.