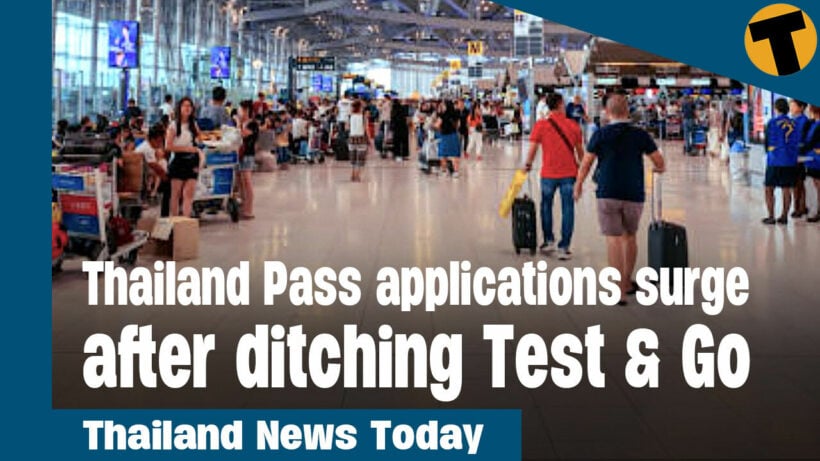 Thailand’s public health minister says there has been a jump in Thailand Pass applications since the ditching of Test & Go, while daily case numbers decline.

According to a Nation Thailand report, Anutin Charnvirakul says registrations have increased, with no problems reported with the simplified system so far.
The health minister also commented on the Covid-19 situation in Thailand, saying that daily new infections are dropping, as are severe cases and fatalities. He adds that this can be seen in a decreased demand for ventilators and antiviral drugs, and the fact that there are fewer patients in intensive care.

Yesterday, Thailand’s new infections fell below 10,000 for the first time since early February. Anutin points out that while the much-anticipated surge in infections following Songkran has not materialised, healthcare personnel, medication, and hospital beds remain on standby.

The health minister says the government has not yet confirmed a date for Covid to be declared endemic in Thailand. Until then, officials will continue to monitor the situation, with a view to easing more restrictions and allowing life to return to normal.

Thailand cancelled its Test & Go and Sandbox entry programs last Sunday, meaning that fully vaccinated tourists can now enter the country without having to take a PCR test before, or on arrival. They are still required to have Covid insurance with a minimum coverage of 10,000 us dollars and to register for the Thailand Pass and are ‘encouraged’ to self-test with an antigen kit during their stay.

Unvaccinated arrivals are required to present a negative PCR test result within 72 hours of departure from their home country if they want to enter Thailand. Failure to do so means they will be subject to 5 days’ mandatory hotel quarantine on arrival.

With Test & Go now tested and gone, the Thai government hopes to see a surge in flights to the kingdom, up to twice the current number by the end of the year.

According to a Bangkok Post report, the Civil Aviation Authority of Thailand is anticipating 83,500 flights a month across all airports by the end of 2022. The current number is 44,500, but government spokesperson ไตรศุลี​ ไตรสรณกุล says officials expect a significant increase in both domestic and international flights.

Thailand ended its Test & Go entry scheme last Sunday, in a bid to attract more overseas arrivals and revive the country’s decimated tourism sector. However, the much-criticised Thailand Pass remains in place, despite calls from both tourism operators and holidaymakers to get rid of it. Thailand now faces tough competition for tourist dollars from neighbouring countries such as Indonesia, Singapore, and Vietnam.

The full impact of international fuel price hikes and inflation is about to arrive in Thailand. After many months of shielding the full impact of price hikes, mostly with a diesel subsidy that capped the pump price at 30 baht a litre, the prices are now set to soar

The government’s diesel subsidy has been in place since last October but the cap, keeping the price at 30 baht a litre, finished at the end of April. After threatening that the price could rise to 40 baht a litre, the Thai Energy Minister has now arrived at a new cap of 32 baht, still heavily reliant on a dwindling pool of subsidy funds. But he’s warned the cap and government subsidies can’t last forever.

Most of Thailand’s transport logistics rely on diesel fuel, so any increase in fuel costs will impact almost anything that is delivered from one place to another. So that’s basically EVERYTHING.

Economists fear that the Thai government, allowing fuel prices to gradually rise, will heavily impact the recovery of businesses and household spending.

The Energy Minister, in raising the diesel cap from 30 to 32 baht said that the cabinet will make the rises at the pump incremental. Now trucking and delivery companies are looking to urgently upgrade some of their business and logistics practices to try and contain at least some of the rising fuel costs.

Alex Ng, Kerry Express’s CEO said the company achieved a 12% improvement in delivery efficiencies “by embracing smart routing through data analytics for its trucks and motorcycles”.

Other companies say they are looking to change their fleet to electric, LPG, or simply more efficient trucks and vehicles. But they acknowledge these changes can’t happen overnight and involve an injection of capital at the same time their businesses are still recovering. The cost of LPG is approximately half the price of gasohol or petrol prices.

Other companies that primarily use motorcycles as the core of their deliveries are also suffering. Filling up the humble motorcycle has gone from a cost of around 80 baht a year ago to around 140 for a full tank.

Thailand and Japan have signed an agreement on the mutual transfer of defence technology and equipment, in a bid to counter growing Chinese assertiveness, according to a report in the Kyodo News.

The Japanese PM Fumio Kishida, and Thai PM Prayut Chan-o-cha, have also agreed to work together in providing humanitarian assistance to Ukraine and its neighbours.

The agreement, signed by both leaders, aims to strengthen security cooperation between the 2 countries. Japan has been seeking to counter China’s growing influence in the Indo-Pacific region, with PM Kishida promoting his vision of a more “free and open” region. The Japanese PM says the agreement signed with Thailand will boost defence cooperation between both nations.

Meanwhile, the Thai PM is hopeful that the agreement will increase Japanese investment in Thailand’s defence industry.

The agreement is similar to other pacts between Japan and other ASEAN nations, including Malaysia, Vietnam, Indonesia, and the Philippines. Kishida is currently on a tour of the region as he seeks to coordinate responses to Russia’s war on Ukraine. Thailand is the third country visited by the Japanese PM as part of his tour, following earlier visits to Indonesia and Vietnam. Kishida says he and the Thai PM are in agreement on standing up to any threat to the sovereignty of any region and are opposed to the threat by, or use of, weapons of mass destruction.

Since Russia’s invasion of Ukraine began in February, there has been some hesitation among Southeast Asian nations to join attempts by the G7 nations to cut Russia off economically and diplomatically. This year, Thailand chairs the Asia-Pacific Economic Cooperation forum, of which Russia remains a member.

So far, Bangkok has remained neutral in response to Russia’s aggression in Ukraine. Last month, in a vote to suspend Russia’s membership in the U.N. Human Rights Council, Thailand abstained.

With around 1 in 6 elderly Thai people still not vaccinated against Covid-19, a lung specialist has taken to Facebook to warn of the health risks they face.

The elderly population is among the group at the highest risk of developing severe Covid-19 symptoms and dying from the virus. To illustrate the danger, Dr. Manoon has highlighted 2 recent cases of Covid infection in elderly patients, according to a Nation Thailand report.

The first case is that of a 74-year-old man who had received 2 doses of the AstraZeneca vaccine. The man has high blood pressure and an enlarged prostate gland.

After developing symptoms over the course of 3 days, he tested positive for Covid-19. However, tests on his oxygen saturation and a lung x-ray came back normal.

The patient took 4 capsules of the Molnupiravir antiviral treatment every 12 hours and, after 5 days, was able to return home. Following a 2-week monitoring period at home, he had another lung x-ray, which also came back normal.

The second patient is an unvaccinated 77-year-old man, who was described as fit and strong, with no underlying health conditions. He experienced coughing and phlegm over the course of 4 days before testing positive for Covid-19 on April 11.

The man’s oxygen saturation and lung x-ray came back normal. A test on his body’s rate of inflammatory activity also came back normal, as did a protein test, which checks the risk of cardiovascular disease. On April 12, the unvaccinated patient began taking Molnupiravir and showed signs of improvement in Covid symptoms after 5 days.

However, on April 18, after stopping Molnupiravir, the man developed a fever and a cough. Both his inflammation and risk of cardiovascular disease also increased, but oxygen saturation and a lung x-ray remained normal. After a course of treatment with steroids, the man finally recovered after 5 days.

According to Dr. Manoon, the findings indicate that even just 2 doses of a Covid vaccine offer more protection than remaining unvaccinated. He says vaccination can help protect the elderly against the risk of severe illness and pneumonia with Covid-19. The lung specialist has also called on Thai doctors to stop prescribing Favipiravir to patients with severe symptoms, pointing out that there are better treatments available.

RichardR
So time to plso time to blame the "dirty s so time to blame" the dirty farang with his dirty habbists " for the next wave or disease that will hit .. Post magazine wrote in march 2020" " Thai…

ThaiEyes
Yes Anutin is trying to stay relevant since being health minister is usually a boring position. Why isn’t the Ministry of Tourism reporting this instead? It is more their purview.
Pompies
So Anutin didn't get his post Songkran Covid surge and has to find another surge elsewhere. It is interesting that there is no measurable number stated in his surge so we can assume that it is actually insignificant. A 100%…

Fundok
16 hours ago, Thaiger said: Pattaya officials and stakeholders have been meeting to discuss the dropping of curfews and an official reopening of bars and the city’s vibrant nightlife. Kunlachart Kunlachai, the superintendent of Chon Buri Police, chaired the meeting.…

Why is Thai media so outdated and how can it be improved? | This is Thailand