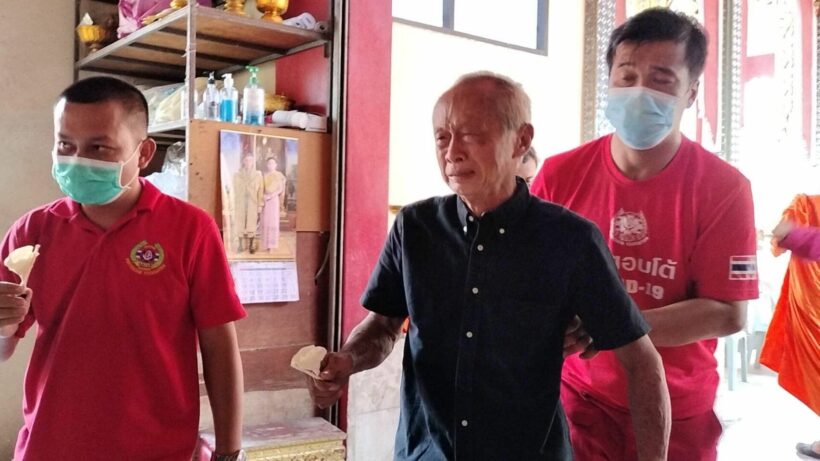 An elderly Thai man from Bangkok finally had his wife’s body cremated after keeping it inside a coffin at his home in Bang Khen district for 21 years. Since his wife passed away in 2001, the 72 year old retired military officer said he couldn’t bear to be separated from his deceased wife. However, he was scared he would die without holding a funeral for her, so he contacted a foundation for help. The foundation helped him to arrange a cremation and funeral, which took place at a temple in Bangkok on Monday.

In 2001, Chan Chanwatcharakarn’s wife died from a brain aneurysm after experiencing high blood pressure. Following her death, Chan took his wife’s body to Wat Chonpratarn Rangsarit in Nonthaburi to have Buddhist rites conducted. When the monks asked Chan if he wanted his wife’s body to be cremated, Chan said no, because he “couldn’t accept the situation.”

Chan took his wife’s body, inside a coffin, to his home in Ram Inthra subdistrict of Bangkok. For 21 years, Chan said he regularly spoke to his wife and told her about his problems as if she was still alive. He said it was love at first sight, and said the pair never quarrelled throughout the duration of their marriage. Chan’s wife had worked as an officer at the Ministry of Health in Bangkok.

Chan said that because he is getting older, he was worried he may not get the opportunity to say a proper goodbye to his lover, so he sought help from Petchkasem Krungthep Foundation. The foundation said they discovered the woman’s body at Chan’s home, which they described as more like a “storage facility.” Chan’s room – which has running water but no electricity – is located in a “wasteland” area surrounded by trees and vines, according to the foundation. The foundation said the woman’s body was in a “dry condition” when they opened the coffin.

The foundation took Chan to Bang Khen District Office to sort through records of his wife’s death and helped him to arrange a funeral, which took place at Wat Sakorn Sunprachasan in Bangkok on Monday, April 30.

The women’s ashes have been placed inside an urn, which Chan said he will keep until he dies.

Ramanathan.P
Certain things cannot be explained in words....may her soul "Rest In Peace"
Fanta
Poor guy. The grief must have been overwhelming and as real today as it was the first day.

PapayaBokBok
Few days ago i rode my motorbike up mountain in CM--saw an old abandoned crematorium.. Went to check it out--saw the open table just sitting there--ashes and actual bones--(leg femur) Wondered how many had been cremated there and how many…
HiuMak
The Power of Love