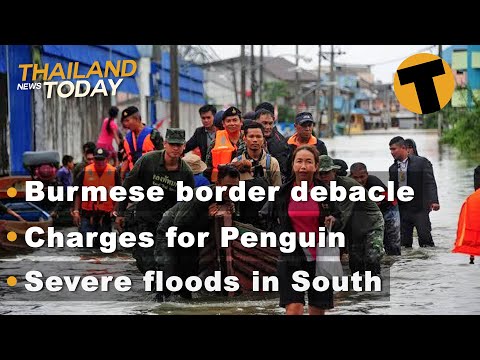 Thailand News Today, coming to you from the relatively dry Phuket, compared to the horrible flooding in parts of southern Thailand.

5 people have been shot and critically wounded in what police believe to be a turf war between 2 rival gangs in Phitsanulok, Central Thailand.

Police say gang members attacked another gang in the Wang Thong district because they were on “their territory.” Police say the alleged attackers threw ping pong bombs and fired shots at the rival gang members. The victims were reportedly found with several bullet wounds and are now in critical condition. Police are continuing their investigations into the attacks and shootings.

A resident of Myanmar’s border town Tachileik claims the recent Covid-19 outbreak has spread at a commercial sex venue parading as a hotel. 10 Thai women have so far tested positive for the coronavirus after returning from the location they had worked at. Some confirmed they worked at the 1G1 Hotel.

A local resident has told local media that a group of “fat military generals” from Yangon, where infections continue to rise, had sex with Thai women working at the venue.

The payment for services was up to 10,000 baht for the Thai girls working there.

Meanwhile, a Facebook page that appears to be linked to the hotel advertises jobs for “beautiful women.” One post offers a 3 day position to earn 30,000 baht, saying the “entertainment” job has “high class business customers.”

The Department of Disease Control says up to 150 Thai nationals have now applied to return from Myanmar, as Covid-19 cases rise in the Burmese border town.

The requests come as health officials attempt to trace hundreds who came into contact with a number of Covid-infected Thai women who crossed back into the Kingdom illegally, bypassing health checks and quarantine.  A man in Chiang Rai who had contact with the women has since tested positive for the virus and we’re awaiting the results of many more tests as of today.

A total of 10 women, all of whom were carrying the virus, are believed to have made the illegal crossing. 2 of them subsequently boarded flights to Bangkok and Phitsanulok.

The Thai military is working with other relevant agencies to block the border crossing at the second Thai-Myanmar Friendship Bridge, in the Mae Sai district of Chiang Rai. At least 80 officials, accompanied by additional troops, are being deployed to check illegal border crossings. #gateshutafterhorsebolted

A student protest leader is facing charges of contempt after he made statements on Facebook critical of the Constitutional Court ruling to acquit PM Prayut Chan-o-cha.

Tuesday’s ruling allows the Thai prime minister and former Army General to continue occupying a military-owned residence. Critics have argued that allowing Prayut, a retired general, to say at the Army residence is a conflict of interest.

Now the director of the Constitutional Court’s litigation office has filed the charge against pro-democracy protest leader known as Penguin. The director says the Facebook posts were defamatory to the court and had tarnished its reputation.

In addition to the Facebook posts, Montri says the protest leader made an offensive speech following the court ruling at the Lat Phrao intersection in Bangkok. Police are now investigating the claims to determine if charges should be pressed.

While the nights draw local crowds, it’s definitely not what it used to be and the once bustling street remains largely empty during the day time.

The deserted street during the daytime remains an ongoing problem for traders who have long term rents with big price tags attached… reflecting the busy international traffic that used to mingle there.

The area has had a reputation for being an eclectic party street with noisy hostels, cheap alcohol and balloons filled with laughing gas but without the foreign tourists, many of the hotels on the street are now closed with most of the traders unable to quickly adapt to the new market conditions.

Heavy flooding in the south of the country has already killed 7 people, while many others have been injured.

The worst of the flooding, which has affected 9 provinces, is in Nakhon Si Thammarat, which has had over 6 days of persistent rain. In total, the floods have affected over 261,000 households and tens of thousands of people. Vast areas of land are submerged, with road and rail travel severely affected in places.

Other southern provinces hit by the heavy rain and flooding are Surat Thani, Phatthalung, Trang, Satun, Songkhla, and Pattani, Yala and Narathiwat down along the Malaysian border.