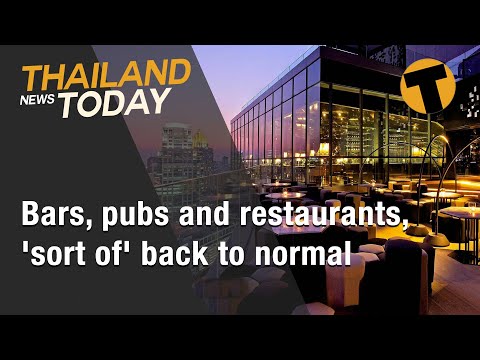 Bars and pubs throughout Thailand will be able to open from March 1 in every province except Samut Sakhon, the recent epicentre of new Covid-19 infections. With Thailand’s number of coronavirus infections now on a downward trajectory, many provinces with little to no cases have been reclassified by the CCSA. The majority of Thailand’s 77 provinces are now classified as “green zones” where bars and pubs can operate as normal.

Bars, pubs and entertainment venues in “orange zones,” which includes Bangkok, will be able to serve alcohol until 11pm. Restaurants will also be able to serve alcohol and offer dine-in services until 11pm. Live performances are allowed, but the customers are not allowed to dance. Some of them shouldn’t be allowed to dance anyway… I’ve seen them. Schools and other education facilities are now open as normal.

Sports stadiums in both “orange” and “yellow” zones can open, but only a limited number of spectators are allowed. Gyms and other fitness centres can open as normal from the start of March.

The pro-democracy Ratsadon group called for “honest” police officers to join a rally taking place today to protest police and government corruption. Protesters are expected to gather at the Ratchaprasong intersection in Bangkok from 5pm, about when this program is uploaded. During last week’s no confidence debate against the PM, members of the opposition accused Prayut Chan-o-cha and his deputy, Prawit Wongsuwa, of involvement in a corrupt system of “payment for promotion” to allow police officers to move up the ranks.

The Ratsadon group is appealing to officers who have not benefited from such corruption to join them in calling it out.

The rally is being called, “police mob to defeat an elephant” in reference to the system known as “elephant tickets”, in which prominent figures at the top of the political system sign tickets that promote officers swiftly through the ranks. It’s understood such tickets can be bought for millions of baht and even give the holder a discount on the bribe needed for promotion.

The crooked system was highlighted during last week’s parliamentary debate, with leaked documents claiming the involvement of the PM and Prawit, as well as another institution that we are unable to mention. An MP from the Move Forward Party, Rangsiman Rome, was swiftly threatened with the country’s lèse majesté law after he presented a 2019 palace document which backed the promotion of 20 police officers.
Rangsiman says he’s aware of the risk he’s taking in presenting such evidence in parliament, but that the system creates a circle of immorality and corruption.

A top virologist from Bangkok’s Chulalongkorn University says the inactivated Covid-19 vaccines that will be in use in Thailand carry a low risk of side-effects. Yong Poovorawan claimss the risk of a severe reaction such as anaphylaxis, is lower with the Chinese Sinovac jab than with the AstraZeneca vaccine.

Posting on his Facebook page, he says a US study shows that 1 month after the administration of 13.7 million vaccine doses, 4.5 cases of anaphylaxis were reported in 1 million patients. No deaths from anaphylaxis were reported. But vaccines such as the Pfizer and Moderna jabs are a newer type of vaccine and therefore have the potential to have more side-effects.

Police in Bangkok are questioning 2 medics and 4 other staff members after a patient allegedly died during a liposuction procedure. A 54 year old died at a clinic in the capital last Saturday. The woman’s 30 year old daughter says her mother wanted to remove fat from her back and had a number of consultations with various clinics and private hospitals. She chose the clinic in the Bang Kapi district because of its “satisfaction guaranteed” assurances.