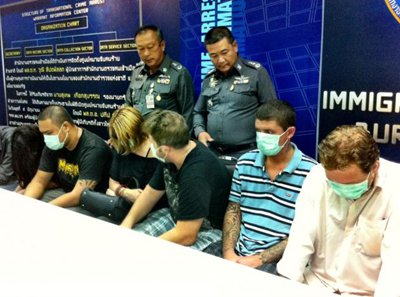 PHUKET: Police have arrested 15 foreigners in Bangkok, most of them from Europe, for allegedly running a call-center scam and duping several people into wiring more than 320 million baht into their accounts.

Of the suspects, six are British, two are American, two Romanian, three from the Philippines, one German and one South African. The suspects were arrested recently at a flat in Sukhumvit Soi 13, where they allegedly ran the scam based on bogus stock-market trades. The suspects usually worked from 1pm to midnight – during which most stock exchanges overseas are in operation.

Police said that most of the victims were Westerners, who were advised by the suspects – posing as independent brokers – that they could make 95 per cent profit from their investment in exchange for a 25-per-cent cut. The suspects had allegedly opened a bank account in Switzerland, which they used to transfer money to Malaysia-based accounts and then on to Thailand.

Meanwhile, police arrested a Liberian national and a Guinea national for duping an American into buying a ‘magic potion’ for 147,000 baht. The potion, they claimed, could turn US dollar bills of a lower denomination into $100 bills. The victim notified police after the suspects demanded another 1 million baht in exchange for the key to a safe deposit where the remainder of the potion was kept.

PHUKET: ASEAN and its key partners Japan, South Korea and China yesterday jointly decided to make universal health coverage an essential provision for the more than 2 billion people living in the region.

This joint statement was made at the 5th ASEAN+3 Health Ministers Meeting held yesterday in Phuket. The countries discussed means of implementing joint activities in the health sector, especially in terms of universal health coverage, sharing their concerns and expressing their commitment to strengthening this collaboration.

They agreed that the universal health coverage played a crucial role in reducing poverty and giving people access to essential health services.

They will also bring up the issue of universal health coverage at a forum with the United Nations.

The ministers also said that ASEAN and its key partners should focus on cooperating over issues such as prevention and control of communicable diseases, emergency response mechanisms, mitigating health impacts of natural disasters, food safety, human resource development for health, traditional medicine development and pharmaceutical development including vaccines.

Public Health Minister Witthaya Buranasiri said yesterday that his counterparts praised Thailand’s successful implementation of the universal health coverage scheme over the past 10 years. The universal health scheme in Thailand has provided more than 48 million people with essential medical services and has reduced their financial burden.

Meanwhile, Vietnam’s Health Minister Dr Thi Kim Tien Nguyen said his government had set its sights on providing universal health coverage by 2020, which would cover poor people, minority groups and children under the age of six.

“We will learn from Thailand because it is experienced in implementing universal health coverage,” she said.

Vietnam is planning to reform its healthcare system and will work on improving its primary care services and strengthening prevention programmes for emerging diseases as well as infectious and non-communicable conditions like heart disease, cancer, hypertension and mental health, she added.

Laos Public Health Minister Prof Dr Eksavang Vongvichit said his country had issued a decree on national health insurance and financing strategies to ensure equity and easy access to healthcare. Laos is hoping to have its universal health coverage scheme also in place by 2020.

“The key direction is to shift from the direct out-of-pocket mechanism to the universal coverage of health,” he said.

Asean+3 health ministers will next meet in 2014 in Vietnam.

PHUKET: Officials in Ranong province are seeking to negotiate the release of more than 80 Thai nationals caught by Myanmar authorities on Wednesday for encroaching onto their land.

The first round of talks between the two military units, held yesterday afternoon via two-way radio, failed, turning the issue into a bilateral one.

News reports did not cite any reasons behind this failure other than that the matter is snowballing bilaterally. Thai authorities have been trying to talk their Myanmar counterparts into relocating the detainees to an area closer to the border, but have not received any replies yet.

Rations have been made available by the Kra Buri district office and were delivered to the detainees yesterday evening.

Foreign Minister Surapong Towichukchaikul said the detainees had been duped into planting rubber trees in a large plot of land and settling there by an unnamed person, who allegedly said that he had sought permission from Myanmar authorities. Surapong said the prisoners were safe and they should not be detained for much longer.

A number of ministry officials have been dispatched to Ranong to coordinate with Myanmar officials and help take care of the detainees’ welfare, he added.

The Commander of the Fourth Army Area, Lt-General Udomchai Thammasaroj, said a senior Myanmar military commander would meet his Thai counterpart today to discuss the issue and find a solution.

Authorities believe that hundreds of Thai nationals are either stranded or hiding on the other side of the border after Myanmar officials cracked down on alleged encroachers on Wednesday afternoon.

Officials and Thai nationals, who have fled home, said more than 300 Thai families have cleared forests and set up a community in the area between the Thai-Myanmar border across from Ranong’s Kra Buri district. They also said that about 800 Thai nationals were in hiding after the crackdown.

Colonel Pornsak Poolsawat, commander of the 25th Infantry Regiment’s Taskforce, said Thai authorities were still waiting for a chance to negotiate the release of the detainees.

Ranong Deputy Governor Patthawee Paratkhajariya said Pornsak, who chairs the joint Thai-Myanmar Border Committee, was prepared to hold talks and was hoping to have the detainees released as soon as possble.
< — Phuket Gazette Editors