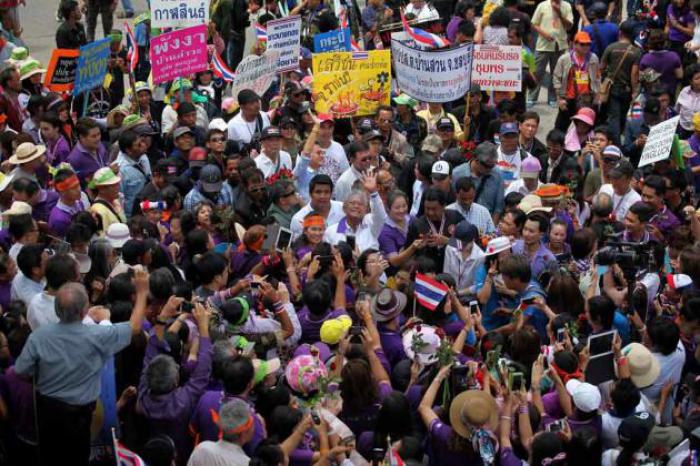 PHUKET: In a renewed effort to help end the political deadlock and avert further violence, Democrat Party leader Abhisit Vejjajiva yesterday unveiled a plan to hold talks with some prominent figures and parties to seek a solution for the country.

“We need to guide our country towards reform. Reform must be carried out under constitutional and democratic principles. And the election process must be acceptable to all,” the former prime minister said yesterday.

Abhisit said he would meet today with Kittipong Kittayarak, permanent secretary of the Justice Ministry, and the Reform Now Network, followed by General Tanasak Patimapragorn, supreme commander of the Armed Forces, on Monday.

He would also attempt to hold similar discussions with the government, political parties and various groups of demonstrators.

“I would like to invite you all to give our country a chance.”

His remarks came in a 3.49-minute video uploaded to YouTube.

Abhisit said that with caretaker Prime Minister Yingluck Shinawatra and anti-government protest leader Suthep Thaugsuban refusing to hold talks to end the crisis, he felt he could not remain idle.

“We have to start by admitting that nobody will get all they want. We have to start with adhering to the national interest and finding a common point that will allow the country to move forward,” he said.

The answer for the country, Abhisit said, does not depend on an election that threatens to renew confrontation and violence, contests to draw the biggest rally crowds, a court verdict, or even another military coup.

Parties should not be pointing fingers at each other over the political deadlock, he said, adding that he included himself and his Democrat Party in this.

“It’s not time to blame each other. We are all responsible for having brought the country to this point,” he said. The country should not be allowed to remain in this state any longer, Abhisit said, adding that fears have arisen of increased violence, and possibly a coup or even a civil war.

Kittipong said he would meet with Abhisit as a member of the Reform Now Network, and not as the permanent secretary of the Justice Ministry.

The People’s Democratic Reform Committee (PDRC) welcomed Abhisit’s proposal to find a breakthrough for the country, saying it was in line with the anti-government movement’s goal.

“The PDRC is ready to have a talk with Abhisit and anyone else who has good intentions toward the country,” PDRC spokesman Akanat Promphan said.

Abhisit would act as a good mediator between the government and Suthep, who is the PDRC’s secretary-general, he said.

Yingluck did not respond to Abhisit’s call for talks between himself and the prime minister. She simply smiled when asked to comment on his request.

Yingluck, who is also the defence minister, urged the military and the bureaucracy to remain politically neutral.

Suthep made the comment to Provincial Electricity Authority (PEA) staff as he led thousands of protesters to PEA headquarters on Ngamwongwan Road in Nonthaburi, in an attempt to persuade state enterprise employees to join the upcoming mass protest to oust Yingluck.

“We need to win in this [final] battle. It may take three, five, or seven days,” he told PEA staff. “There will be several special operations along with the rally.”

Suthep told supporters at Lumpini Park on Wednesday night that on April 30 he would announce when and where the PDRC would have the final rally and urged supporters nationwide to get ready when he blew the whistle.

“It will be the final, the end of our almost six-month-long peaceful protest, when all people come out together to overthrow her [Yingluck],” he said.

He added that if Yingluck was not toppled, he was “ready to give up and turn myself in to the police and let these bad guys remain in power to plunder the country”.

PEA staff welcomed PDRC leaders with the blowing of whistles, roses, money garlands and lemonade. “PDRC and PEA … love the nation and reform Thailand” was written on the cups.

Suthep had earlier received strong support from executives at several state enterprises, saying they were just waiting for him to “blow the whistle again”. They included executives from the Electricity Generating Authority of Thailand, the Metropolitan Electricity Authority and the Bank for Agriculture and Agricultural Cooperatives.

Suthep plans to march to Thai Airways International’s head office today. The national carrier’s union has vowed to come out in full force to welcome him.

Meanwhile, United Front for Democracy against Dictatorship adviser Thida Tavornseth said the body would hold six “warm-up” rallies in some provinces over the next week as a rehearsal for a mass rally prior to the Constitutional Court ruling on Yingluck’s premiership status. The case relates to the unlawful transfer of National Security Council chief Thawil Pliensri.

PHUKET: The RIGHTS and Liberties Protection Department (RLPD) has been pressing for progress in the investigation into the disappearance of a Karen activist.
Por Cha Lee Rakchong-charoen, also known as Billy, has been missing since April 17.

He said his department had been in contact with the National Police Office and Provincial Police Region 7 to follow up on the progress in the case.

Several organisations suspect that Billy’s decision to file a lawsuit against Chaiwat and the Department of National Parks, Wildlife and Plant Conservation may have something to do with his disappearance.

Three years ago, officials set fire to the homes of Karen villagers living in the Kaeng Krachan National Park, and Billy helped the villagers take their case to the Administrative Court.

According to him, the RLPD and non-governmental organisations agree that a white list should be compiled to prepare VIP protection for leaders and prominent figures engaged in community works, as they may be vulnerable to enforced disappearance.