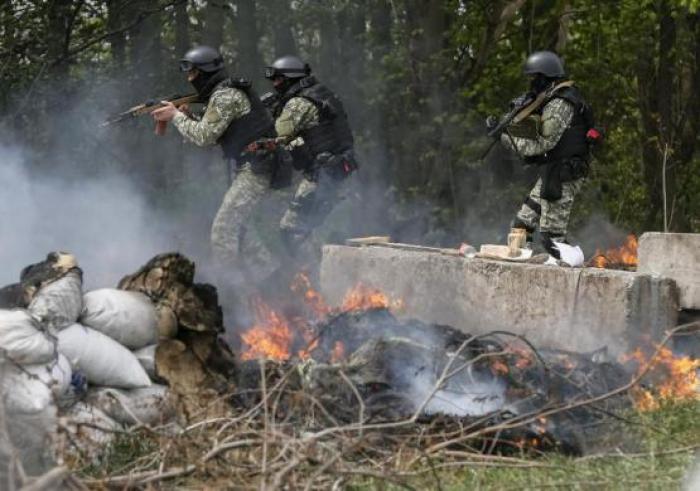 PHUKET: Ukrainian forces killed up to five pro-Moscow rebels on Thursday as they closed in on the separatists’ military stronghold in the east, and Russia launched army drills near the border in response, raising fears its troops would invade.

The Ukrainian offensive amounts to the first time Kiev’s troops have used lethal force to recapture territory from the fighters, who have seized swaths of eastern Ukraine since April 6 and proclaimed an independent “People’s Republic of Donetsk.”

Ukraine’s acting president accused Moscow of supporting “terrorism at the state level” against his country for backing the rebels, whom the government blames for kidnapping and torturing a politician found dead on Saturday.

“The window to change course is closing,” U.S. Secretary of State John Kerry warned in a hastily arranged appearance in the State Department, where he cited President Barack Obama’s comments earlier on Thursday that Washington was ready to impose new sanctions if Moscow did not alter its policy.

In unusually blunt comments, Kerry accused Russia of using propaganda to hide what he said it was actually trying to do in eastern Ukraine – destabilize the region and undermine next month’s planned Ukrainian presidential elections.

“So following today’s threatening movement of Russian troops right up to Ukraine’s border, let me be clear,” Kerry said. “If Russia continues in this direction, it will not just be a grave mistake, it will be an expensive mistake.”

Russian President Vladimir Putin said sanctions were “dishonourable” and destroyed the global economy but that so far the damage had not been critical.

The Ukrainian Interior Ministry said its forces backed by the army had removed three checkpoints manned by armed groups in the separatist-controlled city of Slaviansk.

“During the armed clash, up to five terrorists were eliminated,” it said in a statement, adding one person had been wounded on the side of the government forces.

A rebel spokeswoman in Slaviansk said two fighters had died in a clash in the same area, northeast of the city centre. Slaviansk’s separatist self-proclaimed mayor, Vyacheslav Ponomaryov, quoted on a local news site, said one man was shot dead and another badly wounded on the north-eastern outskirts of the city. He said the dead had been unarmed.

The Kremlin, which says it has the right to invade its neighbour to protect Russian speakers, has built up forces on Ukraine’s border – estimated by NATO at up to 40,000 troops.

Defence Minister Sergei Shoigu announced Moscow had launched military drills near the border in response to “Ukraine’s military machine” and NATO exercises in Eastern Europe. Kiev demanded an explanation within 48 hours of action on the border.

Russia seized and annexed the Crimean peninsula from Ukraine last month after President Vladimir Putin overturned decades of post-Cold War diplomacy by announcing the right to use military force in neighbouring countries.

An invasion of mainland Ukraine’s industrial heartland would be a far more serious action. It had seemed beyond contemplation only weeks ago but now looks like a real threat, although the full extent of Putin’s territorial ambitions remains a mystery.

In St Petersburg, Putin said that if the authorities in Kiev had used the army in eastern Ukraine, it would be a very serious crime against their own people.

“It is just a punitive operation and it will of course incur consequences for the people making these decisions, including (an effect) on our interstate relations,” Putin said in a televised meeting with regional media.

Russia’s Foreign Ministry responded that it was up to Washington to halt the Ukrainian military action, and “force the Kiev authorities, who are wards of the United States, to restrain themselves and not use force.”

Reuters journalists saw a Ukrainian detachment with five armoured personnel carriers take over a checkpoint on a road north of Slaviansk in the late morning after it was abandoned by separatists who set tyres alight to cover their retreat.

But two hours later, the troops pulled back and it was unclear if Kiev would risk storming Slaviansk, a city of 130,000 that has become the military stronghold of a movement seeking annexation by Moscow of Ukraine’s industrialised east.

‘FINISH WHAT WE HAVE STARTED’

At another checkpoint set up by the Ukrainian military, a soldier said they were there to instil law and order.

“Those separatists, they violated the constitution, they are torturing the country, they violated laws, they do not recognise the authority of police, so the army had to move in and we will finish what we have started, so help me God,” he said.

Under an accord signed by Russia, Ukraine, the United States and the European Union in Geneva last week, illegal armed groups are supposed to disarm and go home, including the rebels occupying about a dozen buildings in the largely Russian-speaking east.

Washington accuses Moscow of sending agents to coordinate the unrest in the east, as it did before seizing Crimea last month. Russia denies it is behind the uprising and says the separatists are responding spontaneously to hostility from Kiev. Russia made similar denials over Crimea until Putin acknowledged last week his troops had indeed acted alongside local militia.

“At the state level, Russia is supporting terrorism in our country,” Ukraine’s acting president, Oleksander Turchinov, said in an address to the country on Thursday. “Armed criminals have taken over buildings, are taking citizens, Ukrainian and foreign journalists, hostage and murdering Ukrainian patriots.”

Turchinov called for the eastern offensive this week after the apparent torture and murder of a pro-Kiev town councillor whose body was found on Saturday near Slaviansk.

Volodymyr Rybak had disappeared after being filmed trying to take down a separatist flag while attempting to enter the rebel-held town hall where he worked in Horlivka, near Slaviansk.

“He was bruised and punctured from head to toe … it’s clear they tortured him,” said Aleksander Yaroshenko, a family friend who accompanied Rybak’s widow when she identified his body at the morgue. “The police have lots of details, they have CCTV footage, they should know who did this,” he told Reuters.

Rebels in Slaviansk released U.S. citizen Simon Ostrovsky, one of three journalists they were believed to be holding.

So far, the United States and the EU have taken only mild action against Moscow, imposing visa bans and asset freezes on a few Russians, measures Moscow has scoffed at as meaningless. Washington and Brussels both say they are drafting more serious sanctions and will impose them if the Geneva deal collapses.

Even without serious sanctions, Russia’s confrontation with the West has hurt its economy as fearful investors send their money abroad. Mutual funds specialising in Russia and Eastern Europe were the 30 worst performers out of 3,489 equity