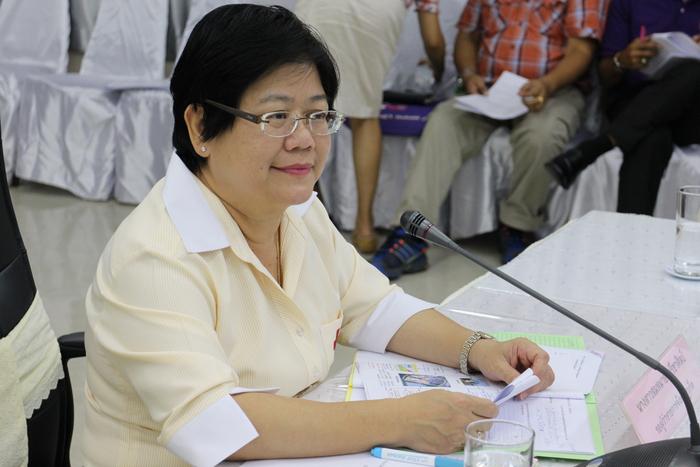 PHUKET: Municipalities across Phuket will launch a project to ensure the separation of hazardous materials from public trash on June 5 in a united effort to prevent dangerous materials from contaminating the island’s beaches, canals and the ocean.

The project was agreed to at a meeting on Wednesday held by the Ministry of Natural Resources and Environment (MNRE) Phuket office.

Public bins for three kinds of trash will be posted at locales across Phuket, said Vice Governor Sommai Prijasilpa.

The bins will be marked: 1) general trash; 2) infectious waste, such as medical waste from small clinics and veterinary surgeries; and 3) hazardous materials, such as used batteries and fluorescent light bulbs.

“Each kind of garbage will be collected on a different day by a different-colored truck,” Vice Governor Sommai explained.

However, Phuket does not have the facilities to properly dispose of hazardous materials, noted MNRE environmental specialist Nutthakrit Polpetch.

“We have to send it to Bangkok at a cost of more than 10,000 baht per ton,” he said. “But at the meeting on Wednesday, all municipalities throughout Phuket agreed to share this cost.”

Mr Nutthakrit pointed out that a lot of hazardous materials, such as used batteries and fluorescent light bulbs, get mixed up in public bins with everyday garbage.

“If we allow it to sit in the landfill, it could contaminate the soil and create a serious health concern and even pose a safety risk. If such materials contaminate a canal, it could poison the water supply,” he said.

The call to action by government and health officials follows a recent complaint from a European tourist who claimed Chinese tourists were dropping used batteries into the sea.

“The tourist said he asked the Thai guide to tell them to stop, but the guide replied that people did it all the time,” said Mr Nutthakrit.

“If everyone dropped whatever they want into the ocean, how much dangerous trash would be floating around? We don’t want to wait until it is too late to fix the problem. Preventing the problem is better than having to fix it.”

At the meeting, Phuket City Municipality Environmental Division chief Prachum Suriya warned that that the volume of trash collected on the island had increased by 4.42 per cent over the past year.

“From last October to March this year, Phuket accumulated 124,930 tons of garbage: 70 per cent of this was sent to the incinerator, while the remainder was put in the landfill,” he said.

The island currently has two operating incinerators that can burn a combined 700 tons of garbage per day.

A third incinerator is undergoing repairs and is expected to go online in 2015 (story here).

Mr Prachum explained in 2012 that once the new incinerator was fully operational, his staff would start using the “extra burn capacity” to burn off the landfill (story here).

To mark World Environment Day on June 5, officials will launch a public awareness campaign with slogan, “Raise your voice, not the sea level.”

“An event will be held at Saphan Hin to promote the importance of preserving our surroundings,” said Vice Gov Sommai.

“There will be educational activities focused on saving the environment and an award ceremony for those who work to preserve Phuket’s environment.

“Mr Prachum will be receiving one of the awards for his hard work in garbage management on Phuket.”