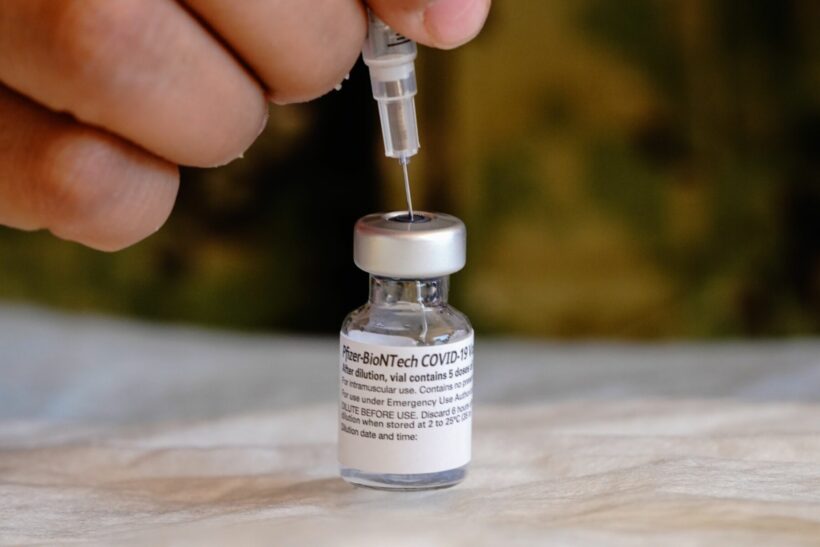 Still waiting for your vaccine? You’re not alone with only around 0.9% of Thailand currently vaccinated. With the Public Health Ministry nailed to just two international vaccines at this stage – the Chinese Sinovac and the AstraZeneca vaccines – it has found itself running short as it tries to catch up to regional neighbours and the rest of the world.

Now the Public Health Ministry says that it’s negotiating with Pfizer to buy 5-10 million doses of the new-technology Pfizer/BioNTech Covid-19 vaccine. Today the PM said they could expect supplies from Pfizer to arrive between July and December this year.

The PM Prayut confirmed that the National Vaccine Institute is awaiting prices from the US-based pharmaceutical company. The PM denied that the government was dragging its feet on the national vaccine roll out.

Except that the government HAS been dragging its feet. To date only 666,000 doses have been rolled out, less than 1% of Thailand’s population over the past 2 months. The arrival of the ordered Sinovac Biotech and AstraZeneca vaccines appears to have been lumpy, at best, and the date for the local production of the AstraZeneca vaccine, under license, continues to be pushed back… now the earliest date is expected to be July.

The prime minister’s response was that he had set up a panel to consider “alternative vaccines”, according to Bangkok Post.

“Initially, the purchases Thailand made were based on the situation at that time, when we were very successful in containing the outbreak.”

“Let me be clear. It’s not that we acted too late or too little. Everything depends on the situation at a given time. We don’t want to subject people to risk when the vaccine was first produced. Several countries opted to do the same.”

The Pfizer/BioNTech works in a different way to the more traditional AstraZeneca and Chinese vaccines. It uses mRNA technology, a completely new approach and the first of its kind. There’s an entire detailed article HERE from the NY Times explaining how the new Pfizer vaccine works.

But no matter what vaccines are available in Thailand, or whenever they may arrive in the provincial hospitals, it still appears that the foreigners and expats will be at the end of the queues, although some local embassies have assured their citizens that the vaccination of their expatriate citizens will be a priority.

News Categories: Coronavirus (Covid-19) Thailand
Related Topics:can I get a vaccine in thailandmRNAmRNA technologynew vaccinesPfizer vaccinesPfizer-BioNTechvaccineswhen can I be vaccinated