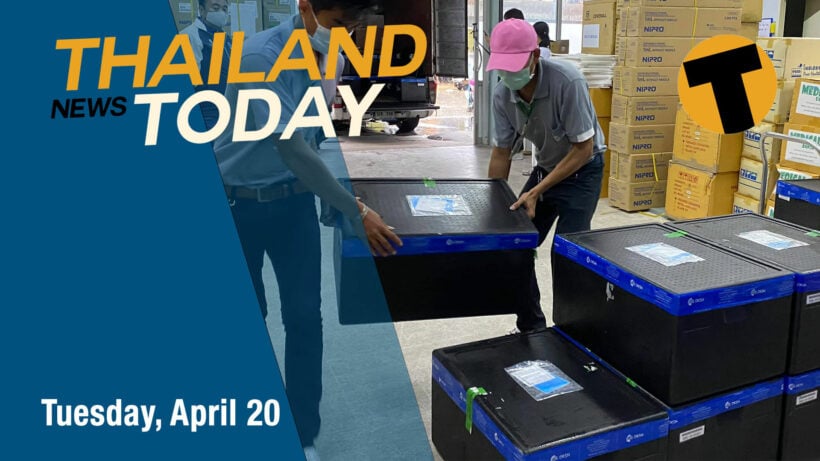 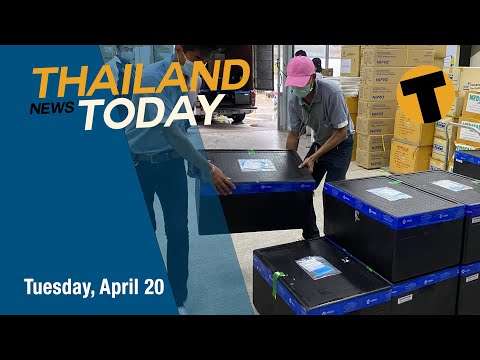 Starting today with the Covid figures… and after a 20% drop in new infections reported yesterday by the CCSA, Thailand has today recorded 1,443 cases.

4 more Covid-related deaths have also been recorded and 55 people are currently on ventilators under state care. The government claims there are 10,000 ventilators available while over 666,000 people in Thailand have now received at least one dose of a Covid vaccine. Only 2 of today’s reported cases were imported.

Thailand’s Public Health Minister says asymptomatic Covid-19 patients ‘may’ be allowed to recover at home, in order to ensure hospital beds can be kept for seriously ill patients. The ministry is preparing a “recover at home” plan, but insists it is not being implemented for the time being as there are currently enough beds available. Just over a week ago, health officials confirmed there was no plan to change its mandatory hospitalisation policy for anyone testing positive for the virus.

From tomorrow, Phuket will join other provinces after additional entry restrictions were announced on Monday by the Phuket Governor.

If you’re flying into Phuket you’ll need either a certificate of proof that you’ve had both doses of an approved Covid-19 vaccine,  a Covid-19-free certificate, not older than 72 hours, or you’ll have to do a Rapid Covid Test at a cost of 300 baht at the airport. If you’re arriving by road you will only have to worry about the paperwork if you’re coming from a red zone.

In practice all this is going to provide a huge deterrent to travel to the island as people won’t want to risk a possible positive test and end up in a field hospital. The new travel restrictions will be in place at least until the end of April.

Thailand’s PM Prayut Chan-o-cha has ordered security agencies to repatriate Thais stranded in Malaysia after Malaysia required all foreigners who had overstayed their visas to leave the country by April 21 due to the Covid-19 situation.

Thai repatriates are being allowed to return to Thailand through 4 southern border checkpoints – Narathiwat, Yala, Songkhla and Satun. But only on Mondays, Wednesdays and Fridays.

Returnees with a fever were immediately transferred to hospital. Those without symptoms were driven to state quarantine facilities, according to the NBT.

Phuket is receiving almost 100,000 Covid-19 Sinovac doses to administer second vaccine rounds to those who received their first jabs earlier this month. 99,480 doses were delivered yesterday at Vachira Phuket Hospital in Phuket Town according to The Phuket news.

The vaccine doses will help continue the mass-vaccination campaign which will continue until April 30. The island’s plan to vaccinate 70% of its residential population by the start of July is still well behind schedule although the arrival of another batch of Sinovac vaccines will help.

The Criminal Court in Bangkok has once again rejected a bail application from anti-government activist, known as “Penguin”. The leader of the pro-democracy Ratsadon group had his application refused again yesterday, on the basis that there was no reason to overturn previous decisions made by the Criminal and Appeals courts. The bail application had been lodged by Parit’s mother with a bond of 200,000 baht.

According to a Thai PBS World report, Parit told judges at the Criminal Court that he didn’t recognise the judicial proceedings. He said he did not want to defend himself during the hearing as previous rejections of his bail applications meant he had not received justice and this made it impossible for him to find the evidence he needs for his defence. It’s understood the protest leader has also asked his lawyer to resign.

Parit is being charged with a number of offences, including lèse majesté charges, for his role in an anti-government protest at Bangkok’s Democracy Monument last November. Meanwhile Human Rights Watch is today demanding  Thai authorities should immediately release pro-democracy activists detained on charges of insulting the monarchy.

Cambodia is also fumbling to contain a sudden wave of new infections that started at the end of February. Cambodian PM Hun Sen, dramatising that Cambodia was “on the brink of death”, locked down capital Phnom Penh and Ta Khmau, some 2 million people. Thousands of field hospital beds are now being hurriedly being set up in public halls, schools and large hotels.

Malaysia, too, is on the uptick again, with daily Covid-19 cases breaching the 2,000 mark each day over the past week after seeing its January/February spike slowly come under control. The uptick, like Thailand, has had unfortunate timing, matching a national holiday where mass movement played into the hands of an opportunistic virus. This year the Malaysian government allowed Ramadan food markets to operate after banning them during Ramadan in 2020.

Super typhoon Surigae, locally referred to as Bising, has hit close to coastal areas in the eastern provinces of the Philippines, with 2 people killed, 1 injured and another missing… along with tens of thousands forced to evacuate. Over 110,000 people have been forced to flee their homes in 6 provinces in the region of Bicol, where typhoons are a regular occurrence.

The eastern Philippines experienced strong winds and high waves yesterday, as the typhoon Surigae swung past its coast in a northerly direction. The super typhoon is the strongest ever recorded in April, with officials from the disaster risk-reduction agency warning of flash flooding and landslides.

The typhoon is expected to veer in a northeasterly direction and dissipate.