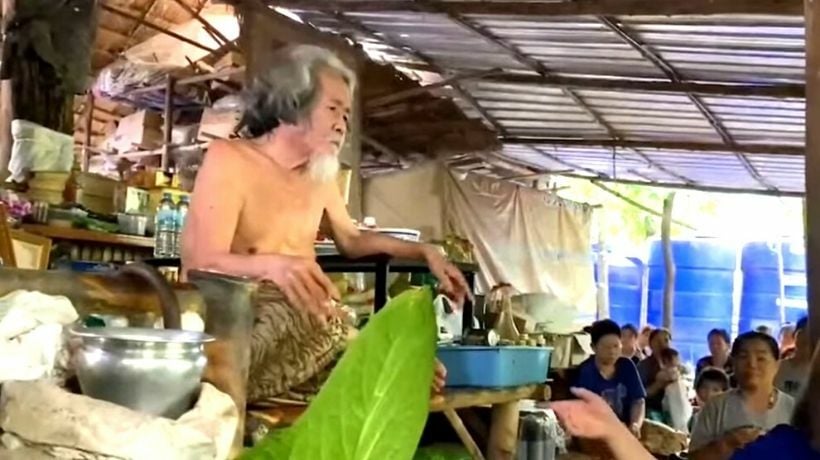 Police and residents in the Isaan province of Chaiyaphum, together with Thai media, have raid the ‘secret’ make-shift compound of a cult hidden in the middle of a rice paddy field after one victim complained that the cult leader “imprisoned followers” and urged them to “consume human waste”.

Thai media reported that 11 unidentified corpses were found inside the compound, and the cult’s leader said “those bodies were waiting to go to heaven”.

Mor Pla or Doctor Pla, a Thai social media influencer who assists residents track down strange religious practices, cults or monks with inappropriate practices, received a report from a female victim that her mother had been lured into joining the cult.

The 53 year old victim told him that her 80 year old mother lived with the sect for a year and “acted weirdly” like she was being “brainwashed”. She said that her mother lived together with other followers and the cult’s leader was named “Joseph,” who claimed to be a “father”. She claimed that the leader lured the followers to consume his waste – feces, urine, skin flakes, saliva and cigarette butts, claiming that all these things could cure every disease.

She told the media that her mother lived there for a year and was shocked after visiting her mother and was told that she was washing her face with the “leader’s saliva and eating scurf”. She told her daughter that there were 11 followers’ corpses inside the compound. One follower told the daughter that “those corpses were waiting to go to heaven”. The sect follower added that anyone who devoted themselves to the “father” couldn’t go back home or leave the compound even if they had died.

Mor Pla, other residents in the nearby community, Thai media and state authorities raided the compound and talked to both the leader and sect followers. A 64 year old follower told the media that his mother’s corpse was in the compound too. He believed all the bodies were “at peace” and didn’t release any bad smell.

“Sometimes they smelled like jasmine… they used the lymph from these corpses to wash their faces believing it was a magic treatment to cure them of everything.”

The sect leader was reported to be either Natee or Joseph and he didn’t have a surname. He explained to Mor Pla and the media that he had never told or forced his followers to consume his waste. He said those did believed in his “powers”.

One among the 11 corpses was a one year old who was unable to be identified at the time of the raid. The local community leader, Amporn Chanratnaew, explained to media that the other 10 corpses, except for the baby, were reported to the authorities “according to Thai law”. However, she and other residents in the community had no idea that all the corpses were hidden and didn’t even know that there was a commune inside the rice field.

The land where the commune was located was a public area, with no owner.

The Provincial Governor, Kraisorn Kongchalard, later visited the compound to advise the cult leader about hygiene and warned followers not to be believe in everything they were being told. The governor said the “leader” would be initially charged for violating the Disease Control Act because no one wore masks. The other penalties would be considered after the autopsies of the corpses were completed and a full investigation into the encroachment of public land.

Grumpish
3 hours ago, Tim_Melb said: Unfortunately although this argument can be used to justify the antivaxers and covid deniers. It does not explain cult followers. For example look at Heavens Gate or if you prefer look at Scientology the large…
CamPat
This reminds me of the 2 western religious fanatic sects which's members died : Jonestown Guayana 918 peope dead The Peoples Temple Agricultural Project, better known by its informal name "Jonestown", was a remote settlement in Guyana, established by the…

PapayaBokBok
Welp I guess its back to MAGA for me--as far as cults go--besides im used to eating King Babys BS......
joseph
North Korea. Kim Il-sung flew into North Korea on a unicorn. Kim Jong-ili & Kim Jong-un neither urinate or defecate. It only gets weirder after that. This is an entire country.
koute
On 5/9/2022 at 11:33 AM, Tim_Melb said: Unfortunately although this argument can be used to justify the antivaxers and covid deniers. It does not explain cult followers. For example look at Heavens Gate or if you prefer look at Scientology…