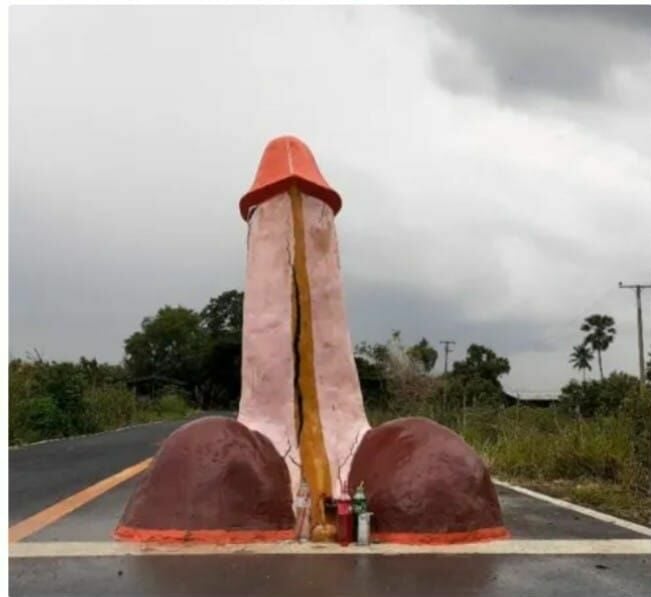 The giant phallus that was erected on a road in accordance with an ancient rain making ceremony in Chachoengsao, a province in central Thailand, East of Bangkok is deteriorating due to sun and rain.

The phallus is now showing deep, veiny cracks from the base of the structure, snaking up to the glans of the penis.

The local villagers had constructed the massive, circumcised phallus on June 9 to bring rain as part of a local rain making ceremony. It was placed on a dead-end, infrequently used road. The ceremony goes back decades.

The phallus, perhaps not just an impotent statue, showered the village in rain a mere 2 days after being placed in the road, says the village headman. After the rain, the villagers prayed at the light pink penis and its coconut brown testicles.

However, it seems the phallus is not quite living up to its expectations. One local villager, 49 year old Somphong Poethon, is a bit critical of the phallus’s performance. He tells Thai media, “Although the statue and ceremony has helped to bring rain to the area there was still not enough water for our rice fields compared to recent previous years”.

He continued on to say:

“Due to continued rain and environmental damage the enormous phallus has started to break and fracture. It will be soon destroyed by the sun and rain but not before completing the ceremonial purpose of bringing more rain”.

Locals firmly believe the phallus is a fertility symbol and one that gives rain to a region that has a large community of farmers residing in the region.

The villagers are indifferent to criticisms of their rain giving phallus. They argue that the ceremony has blessed those in the area for years.