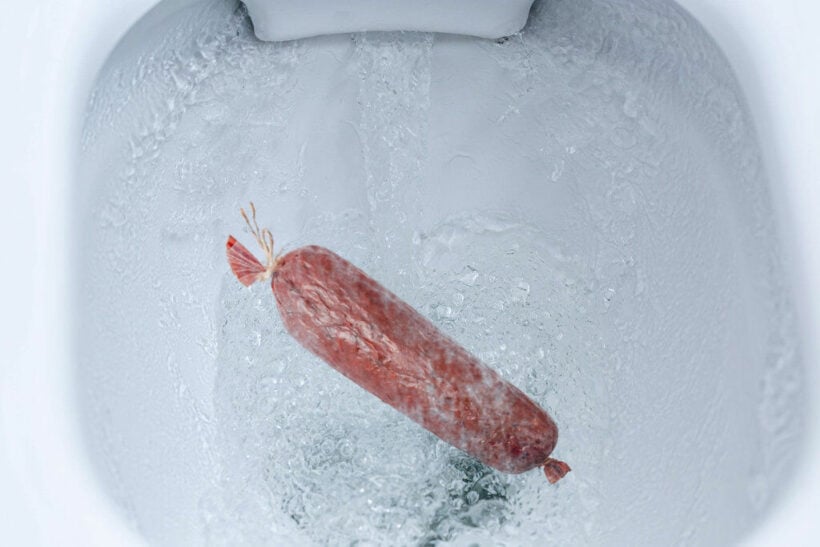 FILE PHOTO: Not a real penis!

Ever felt like your sex life has been flushed down the toilet? A man in Taiwan experienced that literally when his girlfriend cut off his genitals while he slept and flushed them down her toilet on the evening of March 30. The story, first published by the website Mothership the day after the incident, involves a 52 year old man identified as Huang and his 40 year old Vietnamese girlfriend known as Feng, a deep sleep, and a fit of jealous rage. And a sharp pair of scissors.

The alleged story of the domestic dispute started with the man eating Huadiao wine noodles, a ramen dish made with Chinese rice wine. Huang blames this alcoholic meal for the deep sleep he fell into after. Authorities believe the food may have been spiked, explaining why he did not wake up during the genital mutilation.

Feng had suspected her boyfriend was having an affair, and around 11 pm, lost her temper and acting out of jealously, cut off her sleeping boyfriend’s member. She used a sharp object, which she later stated was a pair of scissors, and sliced his genitals off without waking him.

When medics transported him to the hospital, Huang was awake but had lost a lot of blood. Emergency surgery was performed and the man is now in stable condition. It was reported that his modest 7.5 cm package was reduced by 80% to an even more modest 1.5 cm.

Doctors asked Feng where his genitals were, and she informed them that she had flushed it down the toilet. Doctors said that even if they could recover the organ, it would not be able to be reattached. She expressed regret for her actions and turned herself in at the police station and admitted to the spontaneous radical surgery. She said her actions were due to her belief that Huang was cheating on her.

No word on the status of their relationship.

And, yes, it is not an actual photo of the aforementioned penis. Thanks for pointing that out in the comments section.

Thai man arrested after beating and killing dog for being “mangy”