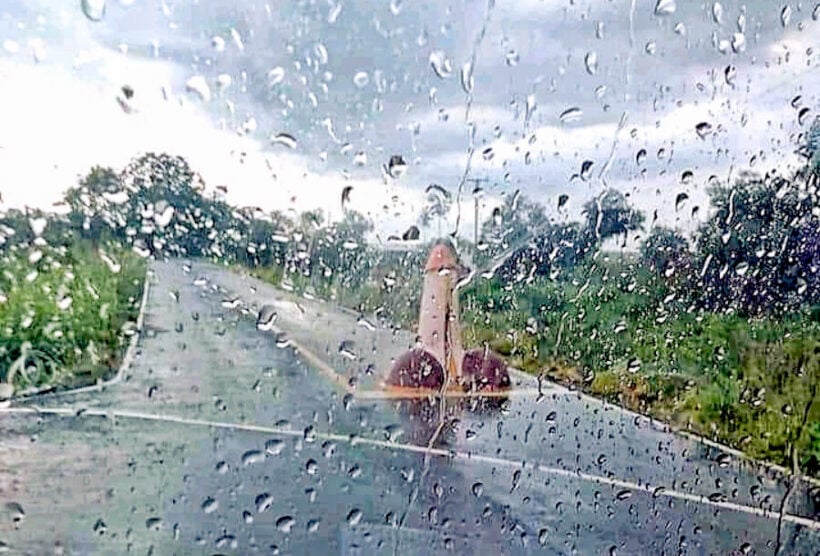 Laugh and make jokes if you must (we certainly did!) but yesterday’s report on the village that erected a giant penis to bring rain has a, erm, happy ending. We’ll give you one guess on what the weather is like in the Yothaka sub-district of Chachoengsao province this weekend.

If you guessed that the penis statue and rain blessing ceremony brought moisture, you’re right. According to a village leader, about 2 days after the giant genitalia were built, the rains came. Yesterday at about 3 pm, the village was showered with about a 30-minute downpour.

Villagers from the sub-district report that the storm was a welcome start to the rainy season, but hopefully it is just the start of consistent rain supplying much-needed water to the rice and other crops. The village lies along the Nakhon Nayok River on fertile farmlands and the dozens of rice fields rule the local economy.

The giant penis statue went viral online, with many around the world finding humour in it, but the huge member constructed in the middle of a local road is part of an ancient rain-making ceremony that has been practised for generations in the village. Prayers and offerings to the statue will continue in order to invite more plentiful rains.

The statue represents fertility and new growth, and the ceremony celebrates fertility and asks for blessings for the coming crops and future harvest, much like many Western rituals dated back millennia. The origins of the Easter holiday trace back to similar ancient fertility rites.

Village leaders expressed disappointment at some negative reactions online, saying that those ridiculing the tradition lacked faith. They requested that, while the ceremonial penis statue to bring rain may seem a bit silly, it has been a tradition for nearly 100 years and people should not be disrespectful to local beliefs.

Whether you believe in the rain-blessing power of the penis statue or not, one thing can be said. In a time with so much news and debate about getting people vaccinated in Thailand, it’s nice to see at least one prick doing good for Thailand.