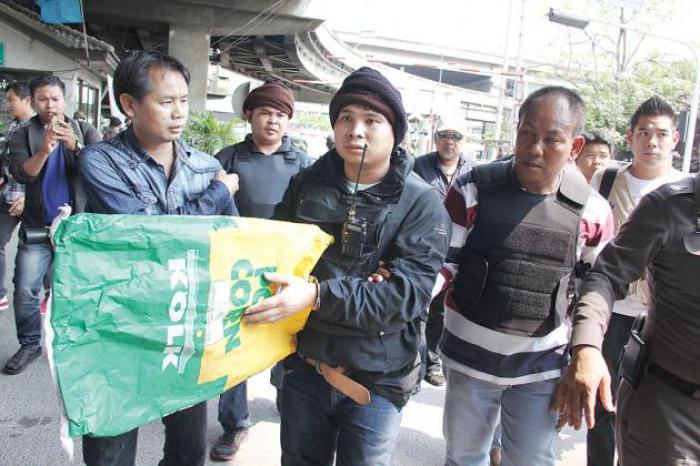 PHUKET: The so-called “popcorn gunman” yesterday confessed that he worked as a People’s Democratic Reform Committee (PDRC) guard and was one of the gunmen involved in the Lak Si shooting incident a day before the February 2 election.

Wiwat Yodprasit, 24, told the press he was paid Bt300 a day to provide security for PDRC protesters at the Chaeng Wattana rally site.

He said he worked under a chief guard called Sumet, who went by the alias Men, and claimed it was Sumet who gave him the M16 rifle he used that day.

Wiwat said he fired at least 20 bullets and concealed the gun in a corn bag to collect spent bullet shells.

He said after the incident he hid by mingling among protesters before moving to live in the house of Sumet’s wife in Surat Thani. He said he had not been trained on how to use the rifle, and did not know where it came from.

Police have yet to find the M16 Wiwat used.

Caretaker Labour Minister Chalerm Yoobamrung, who also oversees the Centre for the Administration of Peace and Order (CAPO), interrogated Wiwat at the press conference.

Police tracked Wiwat down after learning he had developed a close relationship with a woman who often showed up to participate in the PDRC rally.

Police traced the woman and followed her to Surat Thani. Wiwat and the woman were travelling together to a temple in Surat Thani when he was arrested. Wiwat is also wanted on drug charges by police at Nakhon Thai Police Station in Pitsanulok.

The Criminal Court has granted police the right to detain Wiwat for further questioning.

The police has objected to a bail request for Wiwat on grounds that he allegedly committed serious offences. So far, nobody has come forward to offer bail for him.

Meanwhile, PDRC spokesman Akanat Promphan said he believes police might have arrested a scapegoat to defame the PDRC, adding that Wiwat’s confession was suspicious.

In the confession, Wiwat said he had never used an M16 rifle prior to that day, yet video clips shared on social media indicate he was well trained in using the weapon.

PHUKET: The position of Parliament President appears to be in vacuum after the National Anti-Corruption Commission voted unanimously yesterday to indict caretaker Senate Speaker and acting Parliament President Nikom Wairatpanij over alleged violation of the Constitution while chairing parliamentary meetings to deliberate a charter amendment bill on the Senate composition.

In case of a deadlock, anti-government protesters expect a new prime minister with political neutrality to be nominated by the Senate Speaker, acting as Parliament President following the dissolution of the House of Representatives. However, political observers did not expect Nikom to nominate such a person.

The decision of the NACC automatically suspends Nikom from his parliamentary duties pending a decision by the Senate whether to impeach him. He was charged as Parliament vice president over his role while chairing the deliberations on the senatorial charter amendment bill.

The NACC decided to conduct more investigations in the alleged malfeasance case against former Parliament President Somsak Kiatsuranont during the same Parliament deliberations.

Nikom yesterday said he had stopped doing his job and deputy Senate Speaker Surachai Liengboonlertchai would perform the duty as acting Senate Speaker. However, Surachai cannot take charge of the Senate.

Nikom said he would prepare to defend himself before the Senate, which is authorised to impeach him. He believed the Senate would call an extraordinary session to consider the matter in the next 20 days.

Support from at least three-fifths of the Senate is required to impeach a political office holder. An impeachment would result in a five-year ban from politics.

“I will not take any other legal action although I think the NACC’s reasons to indict me were unreasonable. Ordering the end to discussions on the request of the [meeting] participants is the duty of the meeting chairman, which was me,” he said.

On the question whether it would be possible to propose the selection of an unelected prime minister, as the Parliament President must be the person who submits the name for royal endorsement, Nikom said it would be impossible legally.

Surachai said he would now take over from Nikom but he has yet to study the laws over his authority.

Meanwhile, NACC member Prasart Pongsivapai yesterday said the national anti-graft agency had resolved unanimously to pursue the impeachment of the Senate Speaker because he had acted against the Constitution while chairing parliamentary meetings in September last year on constitutional amendments.

Prasart said that Nikom’s actions during those days, such as preventing opposition politicians from debating, were in violation of Article 3 of the Constitution. The clause states that, “The performance of duties of the National Assembly, the Council of Ministers, the Courts, and the constitutional organs as well as State agencies shall be under the rule of law.”

He said Nikom would have to stop performing his duties as soon as the NACC indicts him.

The anti-graft agency, according to Prasart, is also investigating criminal allegations against the Senate Speaker.

The Constitutional Court ruled last year that the charter amendment on the Senate composition was unconstitutional, both in terms of changes proposed and the process.

The two faced charges for allegedly performing their duties dishonestly, abusing their authority and violating the ethical code. The NACC decided that it needed more information to make a decision whether to indict Somsak.

Somsak was Parliament President as he was the House Speaker before the House dissolution in December.

A total of 73 appointed senators currently remain in the Senate while elections for 77 elected senators have been set for March 30.

Earlier, the NACC also pressed charges against 308 senators and former MPs who had proposed the bill and voted for it. Some 293 of them voted in all three readings, while 15 of them proposed and voted for the bill in some readings.

PHUKET: DSI says it might be difficult to prove who has been dumping illegal waste

THE RAGING fire on a large landfill in Samut Prakan might have already destroyed evidence of illegally dumped industrial waste, a senior o