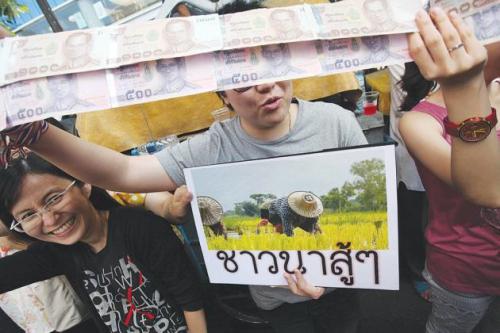 
Suthep keen for alliance with angry farmers
The Nation / Phuket Gazette
PHUKET: The anti-government movement led by Suthep Thaugsuban appears to be seeking an alliance with rice farmers as the embattled caretaker government struggles to find the money owed to the farmers under the price-pledge scheme.

Yesterday, Suthep, the People’s Democratic Reform Committee (PDRC) leader, led another march in Bangkok to raise money for farmers who have not been paid for their crops by the government. A further fund-raising march is planned for Monday.

Suthep said yesterday’s march through the main business district of Silom and adjacent areas aimed to collect at least Bt10 million in donations from the public. The money would go towards financing the farmers’ own protests, said PDRC spokesman Akanat Promphan.

In a repeat of previous PDRC marches on Bangkok streets, supporters and sympathisers lined the street to hand cash to Suthep.

The government owes more than a million farmers a total of Bt140 billion under its rice-pledging scheme, a policy that helped the ruling Pheu Thai Party win the 2011 general election but has now run dry of funds. The rice scheme is also the subject of an investigation by the National Anti-Corruption Commission (NACC).

However, rice growers are split over who should be blamed for the authorities’ defaulting on debts owed. One group of farmers blames the government while another group points the finger at the PDRC.

More than 400 farmers left their road blockade in Kanchanaburi yesterday to join farmers who have been protesting at the Commerce Ministry in Nonthaburi since Thursday.

Many also marched from the ministry to the NACC office to request that the anti-graft agency speed up its investigation into the rice-pledging scheme. After an hour-long meeting between representatives of both sides, the farmers said they were satisfied with a promise that the results of the investigation would be delivered within the next few months.

About 100 Nakhon Phanom farmers gathered yesterday at the Third Thai-Lao Friendship Bridge, threatening to blockade it with a force of 10,000 protesters if the government failed to pay what it owed them within seven days. The 18,789 Nakhon Phanom farmers under the scheme are owed a total of Bt1.39 billion by the government. Elsewhere, more than 250 farmers in Kamphaeng Phet and more 1,000 in Suphan Buri yesterday submitted letters to provincial governors asking Suthep to help push through loans to pay the rice scheme’s debts.

The Kamphaeng Phet growers also asked him to help alleviate the plight of more than 30,000 farming households in the province that have not had rice-pledge payments for the past four to five months.

In Phitsanulok, a group of about 200 farmers gathered at the city hall, calling on Suthep’s help to push through funds for the rice scheme.

A government proposal that rice millers accept receipts from farmers under the scheme has met with reluctance on the part of the rice millers.

Rice Millers Club of Phichit vice chairman Wirat Limthongsomjai said it was unlikely rice millers would accept the pledge receipts because they were already under financial stress. Banks have extended a total Bt300-million credit limit to farmers, while the farmers’ debt totals billions of baht.

“Moreover, each miller will have to reserve cash to buy rice from the next crop,” Wirat said.

Democrat spokesman Chavanond Intarakomalyasut agreed with the government’s idea to encourage rice millers to lend farmers up to 50 per cent of the value of their pledge receipts. But he said the government would have to pay the interest incurred from this deal.


‘We will find the money’
The Nation / Phuket Gazette
PHUKET: The Finance Ministry says it will continue finding funds to pay farmers under the rice-pledging scheme but will keep it methods quiet for fear protesters striving to overthrow the regime will try to block them.

The Finance Ministry’s permanent secretary Rangsan Sriworasart said yesterday that there were many lawful ways to secure funds for the scheme.

However, he declined to provide examples.

“The Finance Minister [Kittiratt Na-Ranong] is trying to do so [find funding] quickly,” he said. “But we can’t reveal what channel it should be. Otherwise, the anti-government protesters will block what we do.”

Rangsan said the Commerce Ministry would accelerate the sale of rice from the stockpiles as quickly as possible so farmers could be paid.

In the meantime, he said the Finance Ministry would try to secure more funds.

There are 14 million tonnes of rice in the state’s inventory.

The paddy pledged by the government under the scheme from crops between October 2013 and this month totalled some 10 million tonnes worth Bt177 billion.

Of that, about Bt60 billion has gone to farmers.

Rangsan said that while the ministry had so far failed to get a Bt20-billion bridging loan tender put out to commercial banks, borrowing via this channel was still an alternative.

He said the staging of another loan tender was dependent on the situation.

The Finance Ministry was reopened yesterday after being closed for 2weeks.


Army to raise pressure over lese majeste cases
The Nation/ Phuket Gazette
PHUKET: The Army will push for police action over cases of lese majeste, amid concern over spread of messages deemed damaging to the monarchy on the Internet.

Deputy Army spokesperson Colonel Sirichan Ngathong said on Friday that the Army would provide information about such acts against the monarchy to the relevant authorities.

“The Army will attempt to stop acts that are offensive to the public. Information will be supplied to relevant authorities and agencies for further action. The Judge Advocate General’s Department will work with the police to keep track of the progress of such cases,” Sirichan said.

She also said Army commander-in-chief General Prayuth Chan-ocha has expressed his concern about the spread of information deemed offensive to members of the Royal family.

The legal action would be taken along with social sanction against people responsible for such acts and comments, according to the spokesperson.

The move followed a controversy in which Somsak Jeamteerasakul, a History lecturer at Thammasat University, posted some messages in the social media that were described by the military as inappropriate and violating the monarchy.

Defence Ministry spokesman Colonel Thanathip Sawangsaeng said that honest comments by academics about the monarchy could be done under the rights guaranteed by the Constitution. However, he did not think Somsak’s recent remark was appropriate. He said the Defence Ministry and its personnel were “deeply concerned” about this matter.

“Such an act has caused bad feeling for military personnel and public members who are loyal to His Majesty the King. His Majesty has long made great contributions to the country,” the spokesman said.


Bombs, banners and a murder in the far South
The Nation / Phuket Gazett