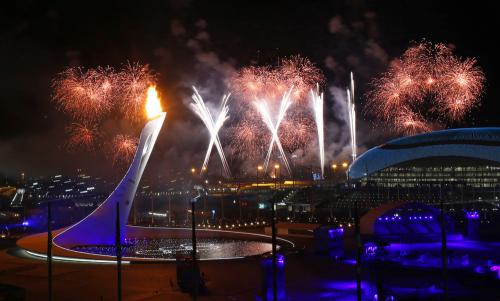 
Russian Winter Games open amid security scares, arrests
Reuters / Phuket Gazette
PHUKET: Russia’s Winter Olympics got underway on Friday with a grandiose opening ceremony watched by President Vladimir Putin, who will be keen to calm fears of militant attacks and move on from a row over gay rights that has marred the build-up to the Games.

Putin has staked his reputation on hosting a safe and successful Olympics in the Black Sea resort town of Sochi, where a colourful show before 40,000 spectators at the gleaming new Fisht Stadium signalled the start of full sporting competition.

“I declare the 22nd Winter Olympic Games open,” said Putin, launching an event he has personally overseen and expects will burnish Russia’s, and his own, image on the world stage.

In an embarrassing technical glitch, one of the five Olympic rings suspended high above the stage failed to unfurl, meaning that the giant structure could not be illuminated by fireworks as planned.

“No normal person would get distracted by one snowflake that did not open from the story that is being told over two and half hours,” he told reporters.

The show went on, blending cartoon-style inflatable domes, ballroom dancing amid towering imperial columns, and giant avant-garde shapes hovering above symbols of revolution and upheaval in a spectacular sweep through Russian history.

Fireworks filled the sky above the Olympic Park surrounding the arena in a rousing finale to a show that drew heavily on Russia’s rich heritage of classical music, literature and dance.

As the ceremony unfolded, a security scare aboard a passenger plane flying from Ukraine to Turkey underlined concerns that the Games could be targeted.

Turkey scrambled an F-16 fighter jet to accompany the Pegasus Airlines Boeing 737-800 plane with 110 passengers on board to Istanbul after a Ukrainian man made a bomb threat and demanded to go to Sochi.

Istanbul Governor Huseyin Avni Mutlu told reporters after the operation to detain him that the suspect was a 45-year-old Ukrainian who had a small bag with electronic goods but no bomb.

The incident came after the U.S. Transportation Security Administration temporarily banned carry-on liquids, aerosols, gels and powders on flights between Russia and the United States.

Some 37,000 security personnel are on high alert in Sochi over threats by Islamist militant groups based in the nearby north Caucasus region to attack the February 7-23 Games, the most expensive ever staged at an estimated cost of US$50 billion (1.64 trilllion baht).

Separatist guerrillas seeking an independent Islamic state in Chechnya and neighbouring regions of southern Russia have vowed to disrupt the Olympics, which they say are taking place on land seized from Caucasus tribes in the 19th century.

Despite a “ring of steel” around venues, Russian forces fear a woman suspected of planning a suicide bombing may have slipped through.

Security analysts believe that an attack is in fact more likely elsewhere in Russia to humiliate Putin, who launched a war to crush a Chechen rebellion in 1999.

Putin was joined at the ceremony by leaders from China, Japan and about 40 other countries in a show of support despite international anger over Russia’s “gay propaganda” law passed last year, which critics say curtails the rights of homosexuals.

Putin says legislation banning the promotion of gay propaganda among minors is designed to protect young people, and has stressed that homosexuals would not face discrimination at the Olympics.

In a speech at the opening ceremony, International Olympic Committee President Thomas Bach called for an inclusive Games.

“Yes, it is possible – even as competitors – to live together under one roof in harmony, with tolerance and without any form of discrimination for whatever reason,” he said beneath a fluttering Russian flag.

As he spoke, gay rights activists said Russian police had detained people who tried to protest on Moscow’s Red Square and in St Petersburg.

Police did not immediately comment on reports by the activists, who said 10 demonstrators were detained in Moscow and four in Russia’s second city.

In St Petersburg, the protesters were held after unfurling a banner declaring “Discrimination is incompatible with the Olympic Movement”, gay rights group All Out said.

Google placed a rainbow version of its logo on its search page featuring the six colours on the gay pride flag – red, orange, yellow, green, blue and purple.

The page also includes a quote from the Olympic charter underlining the right to practise sport without discrimination.

Some Western media questioned the choice of Russia’s triple Olympic champion figure-skater and pro-Putin lawmaker Irina Rodnina to light the Olympic flame at the end of the ceremony, after a tweet she posted last year sparked a racism row.

She posted a picture of Obama which was photoshopped to add a banana in the foreground, an image which angered many including the outgoing U.S. ambassador to Russia, Michael McFaul, who called it “outrageous behaviour”.

Organisers have defended the costs of staging the Sochi Games amid concerns from Olympic officials that the huge price tag could put potential bidders off in future.

They said much of the infrastructure built for 2014 was designed to be used long after the Games finished, and the plan was to turn Sochi into a year-round resort, international sports centre and amusement park.

Despite grumblings about accommodation that was not ready in many cases, the mood among competitors and officials after a handful of early qualifying events in Sochi and at the mountain base 40 km (25 miles) to the northeast was upbeat.

Saturday is the first full day of sporting action, with five gold medals to be decided.